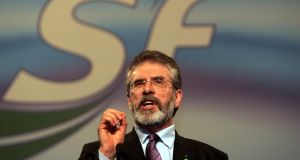 An image of the then Sinn Féin president Gerry Adams giving an address at a party ardfheis in 2008. File photograph: Matt Kavanagh

William Hampton, the English man who left Sinn Féin more than €1.68 million, stayed in a medium-sized caravan in Cootehill, Co Cavan, while using a local solicitor’s firm to make out his will.

“I cut his hair a couple of times,” Sean Foy (89), who runs a barber shop in Cootehill, told The Irish Times. “He struck me as a loner, a lonesome type of guy.”

Mr Hampton set up his caravan on Church Street the first time he came to stay in the town in the late 1990s. “He had a timid, gentle, effeminate walk,” says Mr Foy.

Sometimes local youths hassled him at night. Mr Foy showed the English man a place to park his caravan up near some woods, on the Cavan-Monaghan border. He stayed there for two weeks and came back again the following summer.

However, when he came back on the third year Travellers were parked in the spot near the woods, and Mr Hampton consequently did not stay in Cootehill. “That put an end to him and me,” Mr Foy said.

By then Mr Hampton had fought for more than a decade with the executors of his late father’s will, according to a source with a detailed knowledge of the family’s financial affairs.

His father, Edward, or Ted, Hampton, had come from humble beginnings to become a successful grower of potatoes and other vegetables in the Cambridgeshire fens, with extensive lands beside the village of Fenstanton.

When Ted died in 1984 as a result of suicide, his wife having predeceased him, his estate was left to his two children, William and Jackie. The estate was valued in a deed of probate the following year at £1,391,069.

However, the bulk of the estate was land, and the siblings could not agree about selling it.

Mr Hampton was “wandering around the world” in a camper van and was difficult to contact. He continued to disagree with his sister, who died in 2002, about what should happen to the estate.

When Jackie died, her daughter inherited her estate, but the difficulties continued. It was not until approximately 2016 that the last distribution from Ted Hampton’s estate was made, according to the source.

By then the value of the estate had increased significantly, with most of the land having been sold off for development.

“The executors did quite well for them. You don’t need to be an accountant to know that if you are left just over 1 million [pounds], and you each get two and a half [million], it is a significant multiple.”

The source said Mr Hampton was “an unusual man” who had “a bit of a persecution mania”.

Accounts for an English company called EC Hampton (Wholesale) Ltd, which formed part of the estate left by Ted Hampton, show that during 2007 it paid out dividends of £445,912, and that it was the intention to wind up the company, which would afterwards have a further £1,658,525 for distribution.

It appears that William Hampton, rather than being grateful for the work being done for him by his father’s executors, felt they were oppressing him.

According to the source with knowledge of his family’s financial affairs, at one stage he turned up at his then solicitor’s offices in Huntingdon armed with a gun, in order to argue about his father’s estate.

Former Private Eye journalist Paul Halloran had dealings with Mr Hampton in 1992, when Mr Hampton contacted the publication to complain about being harassed by a firm of accountants.

Mr Halloran soon established that it was the executors of Ted Hampton’s estate, who were trying to get in contact with William about his inheritance, who Mr Hampton thought were persecuting him. “There was no story there.”

Mr Halloran said that in 1997 he was sent a copy of Mr Hampton’s will by the law firm in Cootehill, as he was named in it as being left £1,000. “I sent a letter back to the law firm telling Billy to spend it on himself.”

He said he presumed that Sinn Féin must also have been sent a copy of the will.

(The will, which left small amounts to a number of individuals and the rest to the party, did not disclose the extent of Mr Hampton’s wealth, so it did not reveal how much money the party was likely to receive.)

A spokesman for Sinn Féin could not say when it or party director of finance Des Mackin were first told of Mr Hampton’s decision to leave the money, but said he believed it was only after Mr Hampton’s death in January 2018 that it learned how much money was involved.

Mr Mackin (63) was appointed by Mr Hampton as one of his executors.

Mr Halloran said he met Mr Hampton for an hour or more in 1992, and spoke to him on the phone a number of times afterwards.

“He regarded the approaches [from the executors] as persecution. He lived all over the world. He got thrown out of New Zealand, he told me. He was disturbed. He wasn’t well.”

Mr Halloran said that in the late 1990s he was contacted by the police in London and shown a copy of the will.

“Billy had got into some sort of argument [about Irish politics] with a resident of Mayfair and he said: ‘Don’t you worry about me, I have people in high places, and they’ll deal with you.’”

Mr Hampton had then sent the man he had threatened a copy of his will, which mentioned Sinn Féin and Gerry Adams.

When local community police subsequently made contact with Mr Halloran, he told them Mr Hampton was “as harmless as you’ll ever get. And they were amused, and went away.”

Earlier this year the journalist received a cheque for £1,000 from Ó Muirigh Solicitors, Belfast, who act for Sinn Féin. “I spent it on good wine and bad women.”

The London Times has reported that another recipient of money from Mr Hampton’s will, Rosalind Morton, who was left £5,000, met Mr Hampton in a psychiatric hospital a few decades ago, when she was being treated for depression.

Mr Hampton had mutilated his penis after being accused of having an affair with a married woman, the London Times said, after which he was admitted to the hospital in Kent.

During his time in Cootehill, Mr Hampton visited Doran’s law firm and made out a will with the help of the late Niall Dolan. In the document dated June 27th, 1997, Mr Hampton said he was of “no fixed abode”.

He appointed the late veteran republican Joe Cahill and Mackin, a current Sinn Féin ard comhairle member as well as the party director of finance, as his executors, giving as their address the Sinn Féin offices on Parnell Square, Dublin.

The will stipulates that, apart from the small payments to a number of named individuals, the rest of the estate is to go to the two executors in trust “for the political party in the Republic of Ireland known at this time as Sinn Féin”.

Sinn Féin has said the money is to go to the party in Northern Ireland. It is illegal for political parties in the Republic to accept donations from outside the State or to use foreign donations for political activity in the State.

Mr Mackin, who is a director and shareholder of a number of companies, gives his address in company registry documents as Ravensdale, Dundalk, Co Louth. However, in the March 2019 grant of probate for Mr Hampton’s £2,599,605 estate, issued in Wales, Mr Mackin’s address is an apartment on the Andersonstown Road, Belfast.

Sinn Féin received £1.5 million (about €1.69 million) from the estate. The bulk of the rest of the estate is understood to have gone in tax. Mr Hampton died in a nursing home in Wales in January 2018.

Ron Jacob, who runs a Farm Shop in Fenstanton, knew Mr Hampton and his father.

“Billy and Jackie were, I don’t know the word, they were both okay, but they were both just on the edge, if you know what I mean. I think Mrs Hampton was that way as well.

“Ted was a bit eccentric, really. Somebody used to say that they used to go with him in his car and as he went downhill, he’d knock it out of gear to save petrol. I don’t know [if] anybody was ever close to him.”

Ted Hampton owned a garage in the village, which he later sold to the garage’s staff.

“Billy disappeared and he used to come back occasionally in a camper van. I have a green outside [my shop] and a couple of times he actually parked there for the night.”

Once Billy complained that the owners of the garage wouldn’t let him park his camper van there. “I said, ‘But your dad sold it’, and he said, I’ll sort them out. I’ve got some friends in Sinn Féin, they’ll sort them out,” Mr Jacob said. “I never thought much of it.”

Mr Hampton’s will stipulates that if Sinn Féin should split or cease to exist, he wanted the money to go to whichever party Gerry Adams belonged to, and that if Mr Adams had died, the money should go to the republican or nationalist party in the six counties other than the SDLP that had the most councillors.

He could not say when Mr Mackin or Mr Adams had first been contacted about receiving a bequest.

The party president, Mary Lou McDonald, has said: “Billy was a rebel, a rebel with a cause. He clearly shared our goals.”