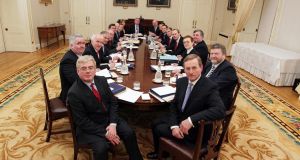 Fine Gael and Labour went into coalition on March 9th, 2011, with a massive majority and leave office with just a very large one.

Their 30-seat surplus is unprecedented in the history of Dáil elections, the closest being the then landslide 20-seat majority Fianna Fáil had in 1977.

Fianna Fáil was decimated in the wake of the economy’s collapse and dropped from 77 seats in 2007 to just 20. Sinn Féin more than doubled its representation, from six to 14, while the United Left Alliance combined with Independents upped the representation of “Others” from five in 2007 to 19 in the 31st Dáil.

Abortion rows, local issues and the inevitable attrition of a full five-year term have taken their toll on the Government’s historic majority and depleted its numbers by a total of 13 TDs.

Fine Gael lost nine TDs, bringing its number of seats down to 67, and Labour lost four deputies, dropping its numbers to 33, leaving the Coalition with 100 seats and a majority of 17.

But there will be more political parties with the advent of Lucinda Creighton’s Renua Party, the creation of the Social Democrats by three Independent TDs and Shane Ross’s Alliance.

The single biggest loss was in the row over the controversial Protection of Life During Pregnancy Bill in 2013 when then minister of state Lucinda Creighton, Wicklow TD Billy Timmins, Dublin South TD Peter Mathews and Dublin North East TD Terence Flanagan voted against the Government-sponsored legislation.

Galway West TD Brian Walsh also lost the parliamentary party whip because of his vote against the Government but later rejoined.

Earlier this year, however, he officially resigned from the Dáil early on health grounds, cutting the Government majority by one.

But the attrition began shortly after the Government took office in 2011 when the party lost Roscommon-South Leitrim TD Denis Naughten after he voted against the Government over the downgrading of services at Roscommon County Hospital.

When then minister for the environment Phil Hogan was appointed EU Commissioner for Agriculture, his Carlow-Kilkenny seat went to Fianna Fáil’s Bobby Aylward in the subsequent byelection.

The party also suffered two tragedies. Fine Gael’s Longford-Westmeath TD Nicky McFadden died from motor neuron disease in March 2014, but her sister Gabrielle retained the seat for the Government in the subsequent byelection.

Meath East TD and minister of state Shane McEntee died by suicide in December 2012 but his daughter Helen McEntee retained the seat for Fine Gael in the byelection.

Cavan-Monaghan Fine Gael TD Seán Conlan resigned from the party in November last year, ostensibly over concerns in the region about pylons, and is set to run as an Independent.

In September 2012 minister of state for health Róisín Shortall resigned from her position and from the Labour parliamentary party in a controversy over approval by her senior ministerial colleague James Reilly of two primary care centres in his Dublin North constituency. She never rejoined the party.

When former minister for finance Brian Lenihan died in June 2011, Labour won his Dublin West seat in the subsequent October byelection when the electorate backed Patrick Nulty. The party briefly had 38 seats. Mr Nulty, however, quickly lost the whip when he voted in December that year against the Social Welfare Bill. In June 2013 he resigned from the party over cuts in teaching hours for children with special needs.

Former Galway East Labour TD and chairman of the party Colm Keaveney went overboard on the 2012 budget when he voted against cuts in the Social Welfare Bill and a year later he joined Fianna Fáil, bringing their representation back to 20 seats.

In July 2015, Labour TD Eamonn Maloney announced his decision not to stand in the general election for the Dublin South West constituency. But when later in the year he decided he would run as an Independent it emerged there had been a constituency selection row.

In the next Dáil the number of seats has been reduced through legislation by eight seats from 166 to 158.