Paschal Donohoe: Inappropriate, unfair for notices to go to families to quit their home 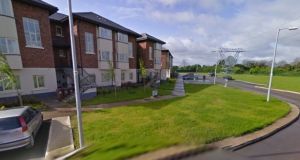 Minister for Transport Paschal Donohoe has described as inappropriate and unfair, the issuing of notices to 60 families in West Dublin to quit their rental accommodation after a deal done by a Goldman Sachs vulture fund with indebted developers.

More than 200 houses in Cruise Park, Tyrellstown are likely to be sold as part of the deal, reported by the Sunday Business Post, in which the Goldman Sachs fund, Beltany Property Finance, bought an €89 million loan given by Ulster Bank to Vieira, a company owned by property developers Michael and Richard Larkin.

The €89 million loan was one element of Ulster Bank’s major Project Achill portfolio of development loans that the Goldman Sachs fund bought.

The paper reported that 60 of the 208 householders have received notices from Twinlite, a Larkin property company, that their leases would not be renewed, and understood that all 208 homes in the development would be sold. Some tenants have lived in the development for up to 10 years.

A spokesman for the Minister for Environment said it was “quite harsh to chuck this amount of people out at one time and many potential purchasers could wish to work with existing tenants”.

If tenants were paying their rent in full and on time “it’s possible the properties could be sold with the sitting tenants remaining in situ”.

The spokesman was unable to say whether the Department of Environment could intervene in the process.

He said the Private Rental Tenancies Board (PRTB) could adjudicate on whether the Resident Tenancies Act was being complied with and the board had the legal powers to do so. The period of notice to quit is linked with the length of the householder’s tenancy.

A Department of Finance spokesman said that whatever conditions a mortgage holder had going into a deal, they would continue, that the conditions they had pre-sale continued post-sale.

But Fianna Fáil Finance spokesman Michael McGrath warned there was a very legitimate concern “that loans may be sold more than once with each subsequent transaction resulting in a deterioration of the conditions of the borrower in respect of the interest rate, penalty charges and the status of any restructuring arrangement”.

He also predicted “we are going to see more of these developments in the months ahead unless concerted action is take.

“Clearly vulture funds feel that there is limited sanction in the law as it currently stands to prevent them putting SMEs into receivership or seeking repossession of family and buy to let properties.”

He said vulture funds had engaged in underhand tactics to trigger defaults by borrowers to gain control of very valuable assets. “There is a real risk now that action of this type will be stepped up once these funds feel that the political backdrop is more favourable for them.”

He said the new Dáil to amend the legislation to ensure that any borrower who entered a restructuring arrangement “and who is sticking to it, cannot have that payment structure cancelled by the acquirer of a loan or an agent operating on their behalf”.

He called on Twinlite to “to assure their tenants that they will not move to evict anyone who cannot find alternative accommodation”.

He also called for Fingal County Council and the Department of Social Protection to “immediately set up a working group to identify all tenants of Twinlite who are at risk of homelessness and to start working with them immediately to help them”.

Former Fine Gael leader Alan Dukes has said the Government and the Central Bank could “make an arrangement” to allow people with distressed mortgages say in the heir homes.

The Central Bank and the Government could make a new arrangement to oblige the banks to take a hit on distressed mortgages, he said.

Mr Dukes, a former chairman of Anglo Irish Bank and director of its successor IBRC said that “if people could continue to pay their mortgage they should do so even if it was difficult.

“If they are not because of the circumstances they find themselves in, then we should have enough compassion to make an arrangement that allows them to stay in their houses.”