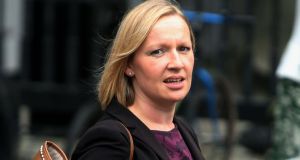 Lucinda Creighton and three other members of the Reform Alliance have asked to join the technical group, to get more speaking time in the Dáil. Photograph: Brian Lawless/PA Wire

The Dáil technical group has written to the Ceann Comhairle, arguing that members of the Reform Alliance should not be allowed to join.

Lucinda Creighton and three other members of the Reform Alliance have asked to join the group, to get more speaking time in the Dáil.

The group’s whip, Independent TD Catherine Murphy, said she was disappointed to have learnt the news from media reports this morning with no consultation from Ceann Comhairle Sean Barrett.

Ms Murphy says Dáil rules forbid TDs who were elected for one party - but who are now independent - from joining the technical group.

“It can’t just be an issue of the Ceann Comhairle deciding that we’ll just let anyone that wants to join the technical group do it, we have to consider other issues such as additional speaking opportunities,” she said.

“I don’t think a political party would be treated in the same way as the technical group are being treated. I can’t imagine Fianna Fáil or Sinn Féin being told that three more people are going into their group, there has to be a bit more thought put into it than that,” she said.

Ms Murphy said that unlike the other political parties, the technical group does not get any resources to administer the group.

“No one can dispute that we have been active members of committees, we raise questions on priority everyday and we participate fully in the life of the parliament. That has been pretty difficult to do when we haven’t been resourced to do it but we have managed it,” she said.

“The Ceann Comhairle seems to be re defining standing order 120. If that’s being redefined there are other implications for that re definition, not least the proportionate speaking time. Committee positions will have to be taken from the Government side otherwise they would be over represented on the committees.

“I don’t think the technical group wants to dilute their effectiveness by dividing the time up and for people who are on committees to come off them or have to be moved around to facilitate others that were elected on the Government side,” she said.

The Ceann Comhairle is being asked to rule on the matter, and Ms Murphy has warned that a legal challenge could be taken if the previous rules are ignored.

Ms Murphy said she will “ wait and see what the Ceann Comhairle comes back with” and speak to other party whips about the issue.