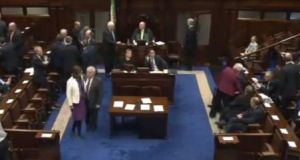 The Dáil is set to take a two-month holiday this year, between July 14th and September 19th.

The Business Committee, which agrees the House’s weekly agenda, met this week to discuss the work programme ahead of the summer recess. It agreed to begin business earlier in the day, to sit later and to sit on Fridays in order to allow the passage of two key pieces of legislation.

The judicial-appointments Bill and legislation to allow Ireland to bid for the 2023 Rugby World Cup will be passed before the Dáil rises.

The Bill to enforce the Oireachtas committee’s recommendations on the future of water charges is also due to be passed before the summer recess, but the legislation is not yet finalised and is unlikely to be brought before the Cabinet on Tuesday.

If it is completed the Dáil may have to sit another week, with a debate solely on domestic water charges.

If agreed, the summer break for TDs will be a month shorter than last year’s recess, which lasted for about three months because of renovations to Leinster House.