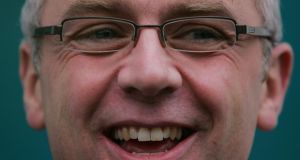 In the latest in a series of taped phone conversations from within the bank Mr Drumm can be heard discussing the implications of the bank suffering €1.5 billion of withdrawals in a single day.

During the conversation between Mr Drumm and John Bowe, the bank’s then head of treasury, Mr Drumm can be heard saying that falling under regulatory minimums is not a disaster, unless somebody finds out.

“The regulatory minimums are not in themselves a disaster for the bank unless somebody finds out about them,” Mr Drumm says, according to details published by the Sunday Independent.

Anglo executives were reluctant to publicly outline the scale of the run against the bank for fear of exacerbating it.

At the time of the recording, in late August/early September 2008, Anglo was close to breaching Central Bank rules with withdrawals running at over €1 billion a day and it was considering approaching the Central Bank for assistance.

Discussing how they might encourage the Central Bank to provide “fallback” funds Mr Drumm is heard to say it may be time for Anglo Irish to have a “conversation with our friends on Dame Street [the Central Bank],” due to the volume cash withdrawals.

“If it gets close to the bone in terms of cash, em, we need to be able to pull money down, so get yourselves ready, and then how does it look and does it become public and all that stuff.”

To which Mr Bowe replies: “And we need to find out what they need from us to give us the cash.”

Mr Drumm and Mr Bowe are heard discussing the liquidity problems faced by the bank and the pressures created by the level of new loans being issued by the bank.

Discussing €800 million in new lending Mr Drumm says “That is not acceptable, so just f**king calm down, we’ll get that sorted. So the lending then. I need to get stuck into it . . . if we have to renege on deals of f**king get the lawyers to stick the boot in stop them closing then that is what we will do.”

Later in the tapes Mr Drumm and Mr Bowe discuss the consequences of the run on deposits.

“Accept that fact that someday we could f**king fall over with f**king literally cash flow. Accept the fact that between now and that day, we will figure out what will happen next, which is really the boys down below giving us a f**king loan.”

In a separate recording from October 2008 the Financial Regulator’s prudential director with responsibility for supervising Anglo Irish Con Horan discusses the suggestion that the bank is abusing the State bank guarantee - introduced in late September 2008 - with Mr Bowe.

“I think that there is a danger, unless we’re clever about this, that we’ll bring the whole thing down on top of us,” Mr Horan is heard to say.

“Because other banks are kicking up an awful lot and there is a possibility that we could blow this whole thing out of the water at a European level if we over egg this, you know?” he adds.

“Definitely, not true Con,” Mr Bowe is heard to say.