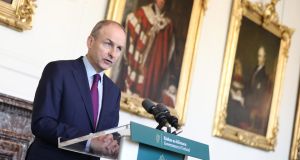 Taoiseach Micheál Martin speaking to the media after giving an address on the Shared Island initiative at Dublin Castle. Photograph: Julian Behal Photography/PA

Taoiseach Micheál Martin has harshly criticised traditional republican rhetoric of the “Brits Out” mould as having no substance and not getting anybody anywhere.

At the launch of the Government’s new “Shared Island” initiative, Mr Martin also seemed to signal a major departure by him from Fianna Fáil’s core policy of the political reunification of Ireland.

He indicated his own priority was to promote greater practical and strategic cooperation between the two jurisdictions across a wide spectrum of areas, prioritising sharing the island over reunification.

Responding to questions surrounding his views on a united Ireland, Mr Martin said his own views had developed over the years, from traditional republicanism to becoming a “passionate” advocate of the Good Friday agreement. Several TDs within his own party have criticised him recently for no longer using the term “united Ireland” when discussing the direction of Northern policy.

Addressing these questions, Mr Martin said: “All the rhetoric. I have heard it for years. When I grew up it was Brits Out. That gets you nowhere.

“It’s not about rhetoric, we can all announce that we want this and that. That’s not the substance of it. Let’s go the hard yards. You have to meet with people, talk with people, engage with people. I have learned that through my political life,” he said.

The new Shared Island Unit in Mr Martin’s department has been allotted a budget of €500million and intends to invest in projects such as the A5 transport corridor (from Monaghan to Derry), the Ulster Canal and the Narrow Water Bridge.

Speaking at a press conference, Mr Martin argued the immediate priority should be increased co-operation between both jurisdictions in the island across many areas including infrastructure, tourism, business, culture. “My focus is on building on strengthening shared relationships on the island,” he said.

Earlier in a speech to a virtual meeting of stakeholders, he said people needed to “probe some of the simplistic narratives about what we have all come through, which have emerged on both sides of the Border.

“The persistence of identity politics, where a position on constitutional identity is judged to be of primary importance, hindering productive discussion about policy priorities or good governance, is a challenge that we must also recognise.”

He said he wanted to pursue a goal of building consensus around a shared future, founded on the Good Friday agreement.

“The genius of the [Belfast] Agreement is that we do not need to be defined or dominated by constitutional questions, as we were in the past.”

Mr Martin’s comments on Thursday – which expanded on those he gave during an interview with The Irish Times in September – have been privately received by some colleagues as a shift away from Fianna Fáil core policy of a united Ireland.

On the Fianna Fáil website, it is stated the party is committed to the peaceful re-unification of the island of Ireland as a single political entity.

“This is a core, founding goal of our party and remains at the heart of our policy,” it states.

In the interview with The Irish Times, Mr Martin was asked about a united Ireland. “I’m not as obsessional about the end result, provided where we end up is that we genuinely share the island.”

Asked was he a persuader for Irish unity, he said: “Look, I’m more in the Séamus Mallon view that we learn to share this island.”