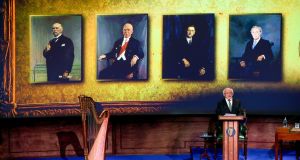 President Michael D. Higgins speaking at the commemoration in the round room at the Mansion House in Dublin of the centenary of the first Dáil. Photograph: Maxwells/PA Wire. 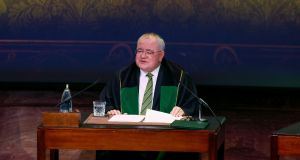 Ceann Comhairle Seán Ó Fearghaíl TD speaking at the commemoration in the round room at the Mansion House in Dublin of the centenary of the first Dáil. Photograph: Maxwells.

The meeting of the first Dáil was “a bold, profound and decisive statement about the future of Ireland” which “changed the course of Irish history”, Taoiseach Leo Varadkar has said.

In an address to a special joint session of the Houses of the Oireachtas on Monday at the Mansion House in Dublin to commemorate the 100th anniversary of the first meeting of the Dáil, the Taoiseach quoted the Democratic Programme adopted by politicians at the same venue 100 years earlier.

It stated that ‘the first duty of the Government of the Republic’ would be to ensure ‘that no child shall suffer hunger or cold from lack of food, clothing, or shelter, but that all shall be provided with the means and facilities requisite for their proper education and training’ reminds us of our responsibilities to children’.

“Although today the rate of child poverty in Ireland is only a fraction of what it was one hundred years ago, and is falling, we must do better,” Mr Varadkar said.

President Michael D Higgins told the gathering, attended by members of the judiciary, the civil service and the diplomatic corps, that the first Dáil was an act of “extraordinary imagination and courage” which provoked a “vicious and arrogant reaction” from the British Empire.

“In place of fear, the Democratic Programme offered hope,” Mr Higgins said. “In place of self-interest, it demanded duty. In place of injustice, it mandated equality. For our forebears were not merely opening a legislative assembly, they were founding a new nation, one capable of articulating and vindicating the rights and aspirations of the Irish people.”

After the President’s address and commemorations of the document adopted at the first Dáil meeting, Ceann Comhairle Seán Ó Fearghaíl called a joint sitting of the Dáil and Seanad to order.

TDs and Senators adopted a ‘centenary declaration’ which committed to strengthening Ireland’s parliamentary democracy, one of the oldest in Europe.

As well as the Taoiseach the leaders or nominees of all the parties and groups in the Dáil all addressed the gathering.

Fianna Fáil leader Micheál Martin said the first Dáil was “the assembly of a rising people determined not only to achieve freedom but also to use that freedom to create new possibilities”.

“They had almost no control over the levers of power but they had an unbreakable will,” he said.

Sinn Féin leader Mary Lou McDonald, who was accompanied by a large group of her party’s elected representatives from the North, used her speech to renew calls for a united Ireland.

“This is not the Dáil of the Democratic Programme. Ireland remains divided. Broken,” she said. “The tenements have gone, but tenants live in fear of eviction. Children no longer go hungry in the streets but now in hotel rooms, unseen and forgotten. The lockout bosses are gone, but workers’ rights are being eroded.”

She said that the Government should “convene an all-Ireland forum to build for unity”.

Labour leader Brendan Howlin said his party had unveiled a “new democratic programme” as a successor to the one adopted by the first Dáil.

Paul Murphy of Solidarity criticised Labour for not demanding a socialist revolution as had recently happened in Russia. “The working class must wait no longer,” he said.

Richard Boyd-Barrett of People Before Profit said the “modern inheritors of the tradition [of the First Dáil] are not the people in his room”.

Instead, he said, the heirs to the tradition of the First Dáil were the water charges protesters, campaigners for marriage equality and abortion rights, housing protesters and nurses who are currently threatening strike action.