Taoiseach gets ‘belt of crozier’ over online parish records 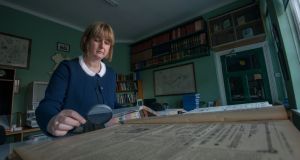 Karel Kiely: “These records were never intended for the purpose we use them today.” Photograph: Brenda Fitzsimons

Taoiseach Enda Kenny received a “belt of a crozier” ahead of the National Library of Ireland’s recent move to provide free internet access to Catholic parish records.

The development was largely welcomed at home and abroad, but was described as a “major breach of trust” in a letter to Mr Kenny from the archbishop of Cashel and Emly, Kieran O’Reilly, released to The Irish Times under Freedom of Information.

Dr O’Reilly said bishops had received representations from local history centres around the country concerned the plan would “gravely jeopardise” their existence and lead to job losses. There were fears income from genealogy enthusiasts would dry up.

“They also noted that this current move by the NLI is a major breach of trust, in that the microfilmed copies of the registers were originally given to the NLP for the purposes of safekeeping and for the safeguarding of an important historical resource.”

From microfilm to digital

They could be viewed at machines in the library on Dublin’s Kildare Street, and still can, but, since July, digital images of baptisms and marriage records have been put online.

Users can search the library’s online offering by parish, but not by name, which transcribed and indexed versions do allow.

They charged for access and strove to respect privacy by providing details only to “bona fide” applicants seeking information about their own family lineage, according to Karel Kiely, who runs a genealogy service from the Kildare County Library in Newbridge.

“These records were never intended for the purpose we use them today. There may be comments like ‘bastard’ or ‘illegitimate’ about babies being baptised,” she said.

Ms Kiely is also secretary of the Irish Family History Foundation (IFHF), and manager of its website www.rootsireland.ie. The centres now depend largely on income generated by website subscriptions.

“We fear it’s only a matter of time before some multinational genealogy companies do their own index. We obviously can’t compete with them,” Ms Kiely said.

John Grenham, a consultant genealogist who writes on the Irish Roots blog on irishtimes.com and is behind The Irish Times’s Irish Ancestors service, welcomed the move.

“Up to now the only way for somebody in North America to search these records directly was in the National Library, which means only a minority could do it. Now it’s available to anybody with an internet connection,” he said.

As for the archbishop’s letter to the Taoiseach, he said: “It’s rare to see a belt of a crozier like that these days.”

Minister for Arts Heather Humphreys said the library hoped the online registers would be a resource assisting the centres “to provide their unique services”.