Speaking on Aran Islands, Leo Varadkar says he intends to ‘keep asking’ for talks with FF 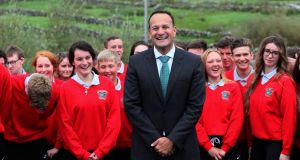 An Taoiseach Leo Varadkar with pupils of Coláiste Naomh Eoin on Inis Meáin, Aran Islands, during a visit to mark the schools establishment as a single entity school. Photograph: Brian Lawless/PA Wire

Taoiseach Leo Varadkar has said that he intends to “keep asking” Fianna Fáil leader Micheál Martin to open talks on extending the Government’s confidence and supply agreement with the Opposition party.

Speaking on the Aran island of Inis Meáin on Wednesday, Mr Varadkar said he was “disappointed” with Mr Martin’s response, but insisted that he was being “totally upfront, totally transparent” about the request sent to Mr Martin last week which he then published online.

Mr Varadkar, who flew out by Air Corps helicopter to mark the transfer of patronage of Inis Meain’s secondary school, Coláiste Naomh Eoin, told reporters that “Fianna Fail love to say we are all about spin and tactics and leaks”.

“ I decided to be very transparent and write a letter to Micheál Martin and put it all down in black and white, and after five days to publish it so people could read it for themselves,”Mr Varadkar said.

“It really is what it says on the tin - the confidence and supply agreement between the two parties is ending in the next couple of months. I am asking that we extend that now, that we agree that there should be an election in the summer of 2020,”he said.

This would give “certainty, political stability and removing any uncertainty about an early election” during Brexit negotiations and “through to Brexit itself”, Mr Varadkar said.

“Also, I set out what I thought could be achieved by the Government, this Fine Gael/Independent Government if we are allowed to continue into 2020, so really it is exactly what it says on the tin, there in black and white and the offer is there,”he reiterated.

Asked if he was disappointed at Mr Martin’s response, Mr Varadkar said he was but added that “we are going to keep asking”.

“It’s not a rush and it’s not a panic,” he said in response to further questions.

“This is an agreement for three budgets for three years, and that third budget is happening in five weeks’ time, and it seems to me that if you had a three year contract and it was about to expire in five weeks that it would actually be prudent that you seek an extension or a renewal of that contract before it expires,” he said.

“ So it is not a rush at all, I think this is something we should have done months ago, and I think it would have been easier to do it during the recess when you are in a less politically charged atmosphere,”he said.

Asked if he was trying to “smoke” Fianna Fáíl out and orchestrate a general election, Mr Varadkar denied this, and said he could call an election anytime, while a Fianna Fáil-Sinn Féin combination could force one.

“The truth is that as Taoiseach at any time it is possible for me to go to the president and seek a dissolution of the Dáil, just as it’s possible for Fianna Fáil at any time to align themselves with Sinn Fein and bring down the Government by means of a motion of no confidence,”he said.

“ It’s not what I want to do. I am being totally upfront here, totally transparent, have put it down in black and white for everyone to read, “he said.

Responding to comments made by the Central Bank governor Philip Lane on Wednesday, Mr Varadkar said the government would be “very cognisant” of what he had to say.

“The last thing we want to do in Ireland is to repeat the mistakes of the past,”Mr Varadkar said.

“ It is absolutely my ambition as Taoiseach is for Ireland, once and for all to break out of the boom and bust cycle, the cycle of stop -start investment, a cycle of tax increases and decreases, pay cuts and pay rises,”he said.

“We want to end that, and have a generation of sustainable growth in living standards and that is what I want to achieve,”he said.

“Our intention is to have a broadly balanced budget this year, and to go into surplus next year,”he said.

“That does mean saying ‘no’ or ‘not yet’ to a lot of the requests and demands that are being made of us, but if we say ‘no’ or if we say ‘not yet’ we are saying it because we have the best interests of the Irish public at heart,”he continued.

“We want to get out of that boom and bust cycle, and we want to have sustained improvements in living standards and infrastructure and public services every year, and not the stop-start, cut- increase, cycle that we’ve been in for far too long,” he said.