People not debarred from ethics committee because of one particular issue, says Martin 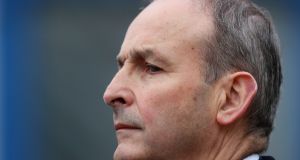 Taoiseach Micheál Martin has defended the appointment of a former Fianna Fáil senator, who lobbied for the National Association of General Practitioners (NAGP), to the State’s ethics watchdog.

The Taoiseach said “people are not debarred from serving on a commission of that kind just because of one particular issue at one particular time. She is eligible and has experience as a public representative.”

He said that notwithstanding the controversy around the NAGP Ms Feeney was being appointed in line with the requirements of the legislation.

He believed people should accept Ms Feeney’s “fairness, integrity and her experience of regulatory affairs”, which he said would be an asset to the commission.

Sinn Féin finance spokesman Pearse Doherty accused the Government of “breathtaking arrogance” over Ms Feeney’s appointment as she lobbied professionally for the NAGP.

He also hit out at the Government seeking to get the House to pass the motion of nomination without a debate and asked why the Taoiseach was afraid of a debate.

Mr Doherty who raised the issue last week, said one of the first matters the commission would have to deal with is the official complaint made against Tánaiste Leo Varadkar about his leaking of a confidential document to the president of the NAGP.

The Donegal TD claimed the Taoiseach was aware that Ms Feeney was an NAGP lobbyist because she had lobbied Mr Martin.

He also questioned if Ms Feeney had actually made all the necessary returns to the commission and referred to lobbying in March 2018.

Social Democrats TD Catherine Murphy said that the commission was there to “hold us all to account”. The House was required to give the appointment a stamp of approval and “we have to be certain that it is above reproach”.

Solidarity TD Mick Barry accused the Government of trying to “artfully dodge” debate on the Sipo appointment and on the judicial process around the appointment of Mr Justice Séamus Woulfe.

He said it was “bizarre, incredible and not on” that a former NAGP lobbyist was to be appointed to the commission and despite the fact that Sipo would adjudicate on the complaint against the Tánaiste.

The Taoiseach said that Ms Feeney who served as a senator from 2002 to 2011 “was seen as a competent person who acted with integrity at all times. I regret some of the comments that have been made in respect of the former senator. They are not merited.”

The Dáil will vote on her appointment on Thursday.