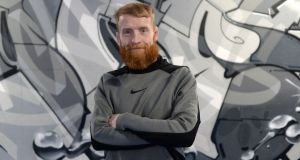 On a rainy Tuesday morning outside The Square shopping centre in Tallaght there was little interest in the controversy enveloping Sinn Féin’s Dublin South-West branch over councillor and former MMA fighter Paddy Holohan.

Most locals quickly hurried in and out of the shopping centre to avoid the persistent rain and few wanted to stop and talk politics. Of those who did even fewer had strong feelings on Mr Holohan’s nomination for mayor of South Dublin County Council.

In January, Mr Holohan made headlines after he questioned Tánaiste Leo Varadkar’s links to Ireland because of his Indian ancestry and then made a series of highly-criticised remarks about women.

In a podcast interview the Sinn Féin councillor for Tallaght South claimed that he had heard of “loads of” underage girls pursuing men and then blackmailing them. There were, he said “some f***ing scum women out there”.

He was suspended by the party for several months, but following his reinstatement again became a point of controversy after his council colleagues put him forward for mayor of the local authority. He lost out in the vote to Fianna Fáil Cllr Ed O’Brien last month.

In response Sinn Féin has suspended all party activity in Dublin South-West pending a full review.

In an email to party members in the area Sinn Féin said the decision “follows some recent political actions taken by some members in the constituency which the Ard Chomhairle views with deep concern”.

Ms Maxwell described herself as a Sinn Féin supporter and had messaged her local branch when she heard of his nomination for mayor. “I was angry . . . because of all the things going on I thought he was a very bad representative,” she said.

The former MMA fighter should “maybe step up and make a big public apology” over his past comments, she said.

Ms Holland, who lost her council seat in the 2019 local elections, said she “welcomed” the party’s investigation into the actions of individuals in the constituency. “I think it’s pretty clear that the comments weren’t endorsed by everyone,” she said.

His comments about Mr Varadkar were “completely wrong” and Ms Holland said she would always “reject that strain of ethnic nationalism”.

“There has been much anger, annoyance and criticism of our councillors’ actions and cumann members want to state categorically that they disassociate themselves from the nomination and agree with such criticism,” said the local group.

Mr Holohan did not respond to a request for comment.