President decides not to refer legislation to Supreme Court 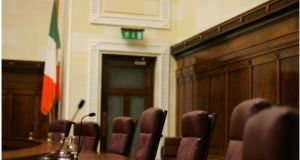 President Michael D Higgins yesterday disclosed that, after consulting with the Council of State on Monday, he would not be referring the legislation – which makes abortion permissible in limited circumstances – to the Supreme Court to test its constitutionality. Photograph: Bryan O’Brien

The decision of President Michael D Higgins to sign into law the Protection of Life During Pregnancy Act has been described as “a key milestone in Irish law” by Tánaiste Eamon Gilmore.

The President yesterday disclosed that, after consulting with the Council of State on Monday, he would not be referring the legislation – which makes abortion permissible in limited circumstances – to the Supreme Court to test its constitutionality.

There is an obligation on the President to confer with the Council of State before making a decision.

Twenty-one members of the Council met in Áras an Uachtaráin for three hours on Monday to discuss the Bill.

Mr Gilmore, who is himself a member of the council said yesterday: “The enactment of this legislation, 21 years after the Supreme Court ruling on the X Case, is a historic moment, particularly for the women of Ireland.

Mr Gilmore said the tragic death of Savita Halappanavar in Galway had highlighted the legal uncertainty faced by doctors in dealing with medical emergencies where the life of a woman was at risk.

“I am proud that this Government has succeeded in enacting a law to protect women’s lives in pregnancy and bringing legal clarity in circumstances where there was hitherto a great deal of uncertainty.”

Fianna Fáil leader Micheál Martin has welcomed the signing into law by President Higgins of abortion legislation, but predicted the new law might be challenged.

“I welcome that. To me it is not a surprise [that there was no referral to the Supreme Court] because the Bill is in accordance with the Constitution.

“It did not go above or beyond the constitutional parameters that are set by article 40.3.3, that has always been my position. That is the legal advice I received in my capacity as leader of the party.”

Challenges
Court challenges would be expected, Mr Martin said, as the course of the abortion debate had been marked by judicial action.

“The President has to make the choice, however, on the basis of his assessment based on advice. It’s his prerogative and I accept that.”

Positing a dissenting view, the Independent TD Mattie McGrath said the decision was deeply regrettable and would pave the way for legal challenges.

Mr McGrath, a Tipperary TD, said: “I had every hope that the blatant unconstitutionality of the Act would be immediately apparent to the Justices of the Supreme Court who can see better than most that that court has moved on considerably since the X-Case Judgment which this Government has used as political cover from the start.

“However, now that the President has exercised his constitutional prerogative, I can only hope that the challenges which are sure to emerge from both sides of the debate will highlight the central unworkability of this dreadful piece of legislation.”

Body of third man found near where two brothers murdered on Cork farm 13:18
Order halting works on Sandymount cycleway issued by High Court 13:15
Two further Covid breaches committed by US troops at Shannon 13:13
Coronavirus search: How is Covid-19 spreading in your area? 13:10
Jack and Grace most popular baby names in 2020 12:26