Tánaiste: UK Brexit proposals could be basis for serious negotiations 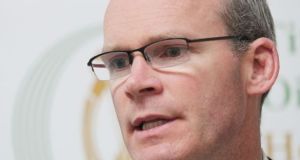 Tánaiste Simon Coveney: I don’t think Britain will get everything it’s asking for.

Britain’s new proposals for leaving the EU could be the basis for a serious negotiation “but it’s far from a done deal”, according to Tánaiste Simon Coveney.

He said the EU will not accept Britain’s Brexit plans “in full”, but the EU had always stated that once Britain softened its red lines “which were contradictory, that they would also show some generosity and flexibility”.

Mr Coveney added: “But I think there will be limits to that flexibility. I don’t think Britain will get everything it’s asking for here but I certainly hope that it can be the base of a real negotiation.”

Speaking on RTÉ’s This Week radio programme, Mr Coveney said there would be concern that British was essentially “picking and choosing what elements of the Single Market they want to be part of”.

The proposals agreed by British prime minister Theresa May’s cabinet include aligning the UK to the single market for goods and agriculture but not services.

It also proposes remaining in a complex customs arrangement with the EU with the intention of having a seamless border between North and South.

But there is concern at the proposal to separate the four single market freedoms on goods, services, capital and labour.

Mr Coveney, who is Minister for Foreign Affairs and Trade, said the EU’s chief negotiator Michel Barnier and others had always been very concerned about that “a la carte” approach.

“From an EU perspective we have to ensure that the integrity of the single market and customs union remains intact and that Ireland is very much part of that.

“But what we’re seeing here is certainly a move in the right direction from Britain and I think that will be taken seriously on the EU side.”

The negotiations would not be easy with the next round of formal discussions taking place on Monday July 16th, when there would be a detailed EU response.

He said there would be an intensification of negotiations when they needed to finalise a text of the withdrawal treaty, including a backstop on the border issue.

“But I think it will be easier to move that forward now given the changed British position.”

He welcomed what he called positive “strong language” including that Britain is “absolutely committed to what we call the backstop but more importantly they are determined to ensure the backstop will never be necessary, which has always been Ireland’s preference.

“We want a future relationship that’s so comprehensive between the UK and the EU that doesn’t require any border checks either on the island of Ireland or East-West between Ireland and Britain.

“That’s what Theresa May is now indicating that she wants too.”

The backstop would keep Northern Ireland aligned to the EU regulatory framework in the event that there was no agreement between the EU and UK.

“We don’t want to have to use an insurance mechanism like a backstop in future, but we will continue to insist that backstop remains part of any withdrawal treaty just in case negotiations break down.”

The British government is expected to publish its 90-page white paper detailing its proposals on Wednesday or Thursday this week.

Fianna Fáil Brexit spokeswoman Lisa Chambers said that to make preparations for a no deal Brexit “is not admitting defeat and would not undermine the negotiation or our position”.

Ms Chambers said “I am concerned that we haven’t the necessary skills that would be required in the event of a hard Brexit.

“I don’t think the Government are stepping up preparations quickly enough because it’s my view that the backstop was oversold last December.

“That had a consequence because it effectively told our citizens, our farming community our business community that everything was going to be fine and they didn’t need to prepare.”