The Dáil has held a minute's silence in solidarity with victims of racism and people who have died internationally due to racist attacks. Video: Oireachtas TV 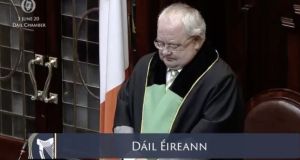 Tánaiste Simon Coveney has said he shares the concerns and outrage of the Opposition at the killing of George Floyd in the US and the protests that had continued for the eighth day in a row.

Mr Coveney said he expected to speak to US ambassador to Ireland Edward Crawford in the next week but he warned that Ireland “should be credible” when speaking about racism and “we need to focus on ourselves as well as looking critically at others” given the racism and marginalisation in Ireland.

The killing of Mr Floyd, an unarmed black man, by police in Minneapolis in Minnesota sparked protests, riots and looting across the country and attacks by police on journalists.

Fianna Fáil TD James Browne criticised “the brutal response to legitimate protest” by some police and state forces and said the overriding message should be a complete rejection of racism and a determination to combat racism in all its forms.

Mr Coveney said “many of us are pretty disturbed and shocked by the images we’re seeing coming out of the United States now for the eighth day in a row”.

He added: “What everybody wants to ensure is that peaceful protest is part of any democracy, as well as the need for robust and independent journalism. Violence is not the way to bring about change here and what’s needed is leadership at a community level and at a political level.”

He said “the undercurrent of anger and discontent that clearly has come from concerns around racism and discrimination has created a huge wave of protests, some of it violent, across US cities.”

Fianna Fail TD Sean Fleming said racism had been highlighted by the “murder of George Floyd by US police. The rule of law and order applies to everybody and all those who participated or were accomplices in this heinous act must be brought to justice. Nothing less will do.” He said “black lives do matter”.

His party colleague John Lahart expressed concern about “paramilitary-style policing” by some US authorities and Fianna Fail Longford Westmeath TD Robert Troy said the response of the Trump administration was “nothing short of appalling”.

The Tánaiste told Sinn Féin TD Ruairi O Murchu that he expected to speak to ambassador Crawford “in the next week or so”.

Earlier in the Dáil on Wednesday Minister for Rural and Community Affairs Michael Ring said he was “totally appalled at what happened in America”.

Minister of State for Defence Paul Kehoe said “I saw some of the scenes the other evening of people protesting in Dublin over this barbaric tragedy that happened in America. It should never have happened.”

The Ministers were commenting after the Dáil observed a minute’s silence against racism across the globe.

Some 20 TDs observing social distancing, including Minister for Arts Josepha Madigan and Minister for Justice Charlie Flanagan and Mr Kehoe stood in silence with ushers and officials as a mark of respect.

Ceann Comhairle Seán Ó Fearghaíl said the move was a “demonstration of our abhorrence of and rejection of racism and as an indication of our solidarity with and respect for all those people internationally who have died in vile racist attacks”.

Ms Madigan wrote to the Dáil business committee asking for a minute’s silence following the death of Mr Floyd.

The Dáil will have a debate on racism next week but a number of TDs raised their concerns during debates on the Covid-19 pandemic.

Mr Ring, who expressed solidarity with those opposed to racism, told Sinn Féin TD Rose Conway-Walsh that his department funds national organisations fighting against racism and “has a fantastic record” in supporting such groups.

Ms Conway-Walsh asked what his department had done to stamp out racism in Ireland and said it could be demonstrated by ending direct provision and introducing hate crime legislation.

She believed the Minister would be as “horrified as all right minded people watching the horrific killing of George Floyd in America”.

Mr Ring, who said he was “totally appalled” by what happened in the US, said his department funded a lot of voluntary groups and organisations dealing with racism.

Describing the killing of Mr Floyd as a “barbaric tragedy” Mr Kehoe expressed concern that if further Black Lives Matter protests were to take place “I ask them to take social distancing into account.” But the organisers cancelled a protest planned for Dublin at the weekend.

Earlier Social Democrats TD Cian O’Callaghan warned that “we must stand up against the politics of fear and hate espoused by president Donald Trump and state leaders in Hungary and Poland and we must move quickly to end the dehumanising practice of direct provision in Ireland”.