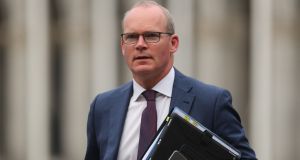 Tánaiste Leo Varadkar has insisted there is no “conspiracy” or “mystery” around the decision making process in Minister for Foreign Affairs retaining his State car and Garda drivers.

Mr Varadkar said it had been security protocol for the past 20 years that the Minister for Foreign Affairs should have Garda transport when travelling to the North. He wanted to be “very clear about this” as he accused Mr Kelly of exaggeration.

The ongoing controversy about Mr Coveney keeping his car and Garda security detail at a cost of €200,000 annually to the taxpayer was raised in the Dáil again by Labour leader Alan Kelly. Mr Kelly has repeatedly questioned Mr Varadkar about the issue as Mr Coveney is no longer tánaiste.

Since a government decision in 2011 the only cabinet members who retain a State car and the services of Garda drivers are the Taoiseach, Tánaiste and Minister for Justice.

It emerged that Mr Varadkar had intervened in the matter while still Taoiseach on security grounds.

The Labour leader asked him how he could have made a request for a State car for a minister “in a government that had not yet been formed” and asked if it was constitutionally possible. But Mr Varadkar told him: “There is no mystery and no conspiracy here and you can try to exaggerate it.

It has been protocol for the best part of 20 years that when the Minister for Foreign Affairs travels to the North “that person has to have a Garda car and Garda protection.

“They are met at the Border by the PSNI who escorts them through Northern Ireland.”

Mr Varadkar pointed out that for most of the past 10 years, the tánaiste has also been the Minister for Foreign Affairs” so it had not been an issue.

“It happened on occasion, when the minister for foreign affairs was not the tánaiste, that they had to have civilian drivers south of the Border and also had to have use of a Garda car when going to Northern Ireland.”

He said that was the issue former minister for foreign affairs Charlie Flanagan dealt with.

“When I knew I was going to be Tánaiste of the new Government and that there was going to be a new minister for foreign affairs, I asked the Secretary General of Government to look into the matter and decide what was appropriate.”

He said “that was the beginning and end of my involvement in it”.

Mr Varadkar added that the Secretary General made inquiries “and the Garda Commissioner advised that it would be appropriate for the current arrangements to be maintained”.