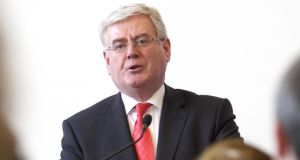 Tanaiste Eamon Gilmore speaking in Belfast where he said the Government had “made it clear we want to bring certainty for women and their medical practitioners where a woman’s life is at risk”. Photograph: PA

Mr Gilmore added that the secret recording of two Labour TDs speaking about Labour having a strategy to seek the gradual liberalisation of abortion law would have no bearing on the Government’s attitude to the X case legislation.

Speaking in Belfast Mr Gilmore said he expected the Government would bring forward its legislation on abortion tomorrow.

“From the very beginning we have made it clear we want to bring certainty for women and their medical practitioners where a woman’s life is at risk”.

“I think this is about trusting women. I think it is about listening to what women want in this situation,” he said on the margins of an event he held with the Northern Secretary Theresa Villiers in Belfast marking the 15th anniversary of the Belfast Agreement.

Mr Gilmore was reluctant to be drawn about the secret recording of Aodhan O Riordain and Anne Ferris, as reported in the Sunday Independent, who indicated that Labour strategy was to further liberalise abortion legislation once the X case was passed.

“I don’t think it changes anything,” said Mr Gilmore. “The Government has already settled an approach to this issue. The approach will be decided by Government this week. This is always an areas that is complex, that is sensitive, but at the end of the day it’s about providing safety, it’s providing certainty for women, and we intend to legislate to that effect.”

Asked were the comments of Mr O Riordain and Ms Ferris helpful he repeated: “It does not change anything.”

He was also asked about claims that Labour was seeking to introduce abortion legislation by stealth. Asked was this the case he replied, “No. We made a decision on this. We have a requirement to legislate. There is a decision of the European Court of Human Rights. There was a decision of the Irish Supreme Court 20 years ago which required legislation to be enacted. It hasn’t been dealt with for 20 years.

This Government is clear that it will deal with the issue by way of legislation.”

Mr Gilmore was also reluctant to express a view about comments by former Fine Gael Taoiseach John Bruton in the Irish Independent suggesting suicide risk should not be grounds for abortion.

“He is entitled to his views on this matter but the Government has to make a decision on this matter. There is a requirement to legislate”.

Mr Bruton’s claims have added to the increasingly fractious nature of the debate over imminent legislation on the issue.

Speaking from Taoiseach Granada, Spain, Enda Kenny has appealed for, saying people should wait until the draft law is published before passing judgment on it.

“I think that people should wait until they have the explanatory memorandum and the heads of the Bill before they decide to comment on what’s actually in it,” Mr Kenny said.

“I might say this is about saving lives. It’s about saving the lives of mothers, about giving equal right to their unborn children. It’s about providing legal certainty which is what the intent of what’s involved here is,” he said.

“What we have to do will be entirely within the Constitution, will be strictly legal, will not change the law in any respect, will not import any new rights into the existing legislation, but will provide a sense of certainty, legal certainty and confidence where this concerns women and their unborn children.”

“This is always a difficult issue when it arises. I think it’s important when members of our parliamentary party consider all the various factors of concern.

Earlier, Fine Gael TD Brian Walsh said he would not vote for abortion legislation based on any threat of suicide on the part of mothers.

The Galway West deputy said the law needed to make it absolutely clear” that medical professionals can provide necessary treatments in pregnancy to protect the life of the mother “without fear of reproach, including termination where her life is the subject of a substantive risk”.

His stance comes as opposition to the legislation within Fine Gael hardened after the publication of secretly taped private conservations on the topic with two Labour TDs.

Other Fine Gael TDs such as John Deasy, Peter Matthews, Michelle Mulherin and James Bannon have expressed opposition to the inclusion of the suicide option.

Although a number of Fine Gael TDs who had opposed the inclusion of a suicide threat as grounds for abortion in the legislation have had their fears heightened by the disclosures, the Taoiseach said the new laws would be entirely within the Constitution and would not import any new rights into existing law.

The Galway West TD said he hoped the concerns he and others were expressing would be taken on board for the final legislation TDs are asked to vote on.

“I fear that the motivation behind the pro-choice lobby and pro-choice parliamentarians is that this will open it up for further liberalisation.”

Mr Kenny said the initiative was designed around providing legal certainty on the abortion question.