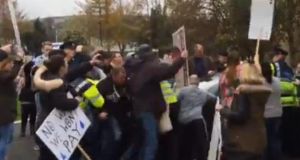 A screengrab from a video claiming to show water protesters surrounding the Tánaiste’s car in Tallaght today. 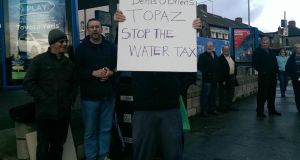 Tánaiste and Minister for Social Protection Joan Burton was trapped in her car for over two hours this afternoon by water charge protesters in Jobstown in Tallaght.

The incident began at about 1pm after the Tánaiste spoke at a graduation ceremony at the An Cosán College in the area.

Protesters surrounded and blocked Ms Burton’s car by sitting infront of it and it is understood that she was later transferred into a garda car which made its way slowly through the crowd of protesters with a garda escort and on to the Blessington Road before leaving the scene shortly before 4pm.

A Garda spokesman said two men in their late teens were arrested in connection with the incident. One was detained over criminal damage to a garda vehicle and the second for a public order offence, he said

Gardaí were called to the scene at about 1pm and a garda helicopter monitored the situation.

Socialist Party TD Paul Murphy, who participated in the demonstration, said the protest, which began shortly before Ms Burton attended the ceremony at noon, had been peaceful.

“The protest has been peaceful. Yes she has been delayed here for a number of hours but I think this protest has sent a very clear message to her, a message which the Tánaiste has ignored to date, that that people don’t want to pay these water charges.

“There is national anger over the changes but particularly in Tallaght and Jobstown in west Dublin...there are a lot of people who simply can’t afford to pay,” he said, adding the protesters were also sending a message to Irish Water that the people of Tallaght would not accept water charges.

Have supported both #IrishWater protests but the physical intimidation of Joan Burton today is totally unacceptable.

Wonder does Joan Burton get the message yet. No water charges, no way. #wewontpay

.@joan_burton I know is caring, compassionate, capable, responsible, fair-minded, she did not deserve to be treated that way by protesters

Independent Senator Katherine Zappone, a co-founder of An Cosán College where Ms Burton was visiting, said she witnessed much of the protest and described the “menacing nature” of the demonstrators as “unacceptable”.

“The actions of some of the protestors generated an air of intimidation and menace which turned what should have been a local community celebration into a major security operation, with the Garda Public Order Unit on the ground and a helicopter overhead,” she said.

“The blockading and banging of posters on the Tánaiste’s car, the jostling and spitting at those involved in the event goes beyond any legitimate form of protest.”

Minister for Communications Alex White, Ms Burton’s Labour colleague, told RTÉ that it was “anti-democratic” to block somebody in such a way. He was critical of Mr Murphy, saying the incident was not consistent with the principle of socialism.

A spokesman for Ms Burton said she had attended a graduation ceremony at an Cósan higher education college. “Nothing should be allowed detract or deflect from what was a very important day for those students,” he said.

The protests come two weeks to the day after over 100,000 people marched against the introduction of water charges in cities, towns and villages across Ireland including tens of thousands of people who turned out in various locations in Dublin.

Public anger over the proposed charges has led the Government to propose a much simplified system of water charges which will result in an effective annual charge of less than €200 per household.

The Coalition parties hope that this reformed package, which is due to be finalised in days to come, will be enough to encourage a majority of households in the State to register with Irish Water and end the ongoing controversy which the proposed charge has generated.

The revised plan would see the discarding of multiple tiers of charges based on the number of adults in a household. It will also replace three separate water allowances with a single universal allowance.

Under the scheme, every household which registers with Irish Water and gives details to the Department of Social Protectionwill be entitled to an annual allowance of some €100.

The single allowance will be available to all households irrespective of means. It will replace the tax concession included in the budget, and other allowances announced as part of the social welfare package.

There will also be a simpler charging model, based on only two rates. The first rate will be for a single-adult household and the second for a household of two adults or more.

Referring to the expected proposals on Thursday, Taoiseach Enda Kenny said the Government had “listened very carefully to the concerns and anxieties of the people.”

Meanwhile, a small group of protesters held a demonstration outside a Topaz outlet in Malahide, Dublin today.

The Topaz Group is owned by businessman Denis O’Brien. GMC/Sierra, which is part of the O’Brien-owned Siteserve group, is one of a number of firms involved in the installation of water meters.