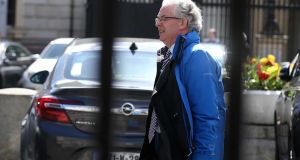 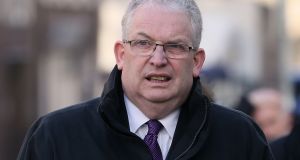 HSE director general Tony O’Brien is to take a temporary leave of absence from the board of a US company he joined earlier this year. Photograph: Niall Carson/PA Wire

Government Ministers are not ruling out the possibility of director general of the Health Service Executive Tony O’Brien leaving his position earlier than planned.

Mr O’Brien is due to leave his role in July but there have been increasing calls for him to stand aside in recent days.

There is a real fear among Ministers that they have yet to learn the full extent of this controversy and so they are reluctant to fully support him out of concerned for what may emerge.

Asked yesterday if he had confidence into him, the Tánaiste Simon Coveney declined to express full support for Mr O’Brien.

He said: “Tony O’Brien’s focus on providing as much information as possible and putting systems in place that can co-operate fully with that independent investigation is probably the best way that he can assist in this process, rather than stepping aside from it.”

Mr O’Brien has faced calls to stand aside over the past week over the revelations surrounding the delayed diagnosis of 208 women with cervical cancer.

Fianna Fail TD John McGuinness told The Irish Times Mr O’Brien has presided over a number of controversies in his tenure as director general.

No other organisation or employer would allow Mr O’Brien to remain in place, Mr McGuinness added.

The Carlow Kilkenny TD expressed this view at the Fianna Fáil parliamentary party on Wednesday. It is understood party leader Micheál Martin told members this was an “evolving situation” that may need to re-examined at a future date.

It emerged yesterday Mr O’Brien is to take a temporary leave of absence from the board of a US company he joined earlier this year.

The Irish Times revealed on Wednesday that Mr O’Brien became a non-executive director of the San Diego-based contraceptive manufacturer Evofem Biosciences while at the same time continuing to run the health service.

It is understood there was contact between Minister for Health Simon Harris and Mr O’Brien on Thursday morning and an agreement for him to step down temporarily from the US company was reached.

Mr O’Brien’s position in Evofem entitles him to annual fee of $65,000 and share-buying options up to $450,000 in his first three years with the company.

Sinn Féin deputy leader Pearse Doherty said Mr O’Brien’s decision to stand aside from the board of the company did not go far enough. He said the move “only goes to show the inappropriateness of the health minister’s sanctioning the board appointment”.

Meanwhile, Fianna Fáil has questioned why the Government had not yet commenced a process for recruiting a new HSE director general to succeed Mr O’Brien.

Fianna Fáil health spokesman Stephen Donnelly said: “It has been publicly known since March that the Director General of the HSE would be leaving in July. It seems that the Minister for Health has known since last June of his departure as that’s when approval was given for Tony O’Brien’s extracurricular activities and it was given on the basis that he would be leaving the HSE.”

“After the events of the last week it is ever more clear that the HSE needs strong leadership and a new direction. Yet as with so much else in the health service there is no sense of urgency in putting that in place”