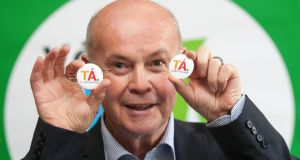 TÁ Comhionannas the Irish language group seeking a Yes vote in the upcoming referendum on same sex marriage officially launched its campaign in Dublin on Wednesday.

The group is affiliated with Yes Equality and aims to secure a Yes vote from the Irish-speaking public in the May 22nd referendum.

Marriage equality, he said, is an issue that nearly all Irish people are talking about. The purpose behind TÁ Comhionannas, Mr Ó Buachalla said, is to give a voice to those in the Irish speaking community wishing to support the Yes campaign.

Posted by Pobal na Gaeilge do YesEquality on Wednesday, May 6, 2015

“We realised there was a need to run a campaign in Irish. We wanted to ensure that the voice of the Irish language community could be heard,” Mr Ó Buachalla said.

The group will canvas Gaeltacht areas and Irish language communities and will be available to assist those who wish to engage with the Yes campaign through Irish.

“Every family is different, every home is different. I don’t think there is a family in Ireland that doesn’t include a single mother or a single father a gay person. Life has changed. People are more open and I’m hoping that this change in mentality will be seen in the form of a big Yes vote on the 22nd of May.”

Former Fianna Fáil government minister Pat Carey said the interpretation of marriage, which he said was the bedrock of family and community in Ireland, should be inclusive of the LGBT community.

“The Irish language in the way that it describes family is inclusive of the strong tradition of family in Ireland,” Mr Carey said.

“We are asking people to vote Yes because marriage matters in Ireland. It is the bedrock of community and family and we believe this should be extended to lesbian and gay people who are our sons and daughters, brothers and sisters, they are our community members.”

The campaign slogan ‘Tabhair dom do lámh’ (Give me your hand) was taken from a composition written by 17th century harpist Ruaidri Dáll Ó Catháin and featured during a performance by musicians including fiddle player Colm Mac Con Iomaire, accordionist Martin Tourish, harpist Triona Marshall and Kíla’s Eoin Dillon.