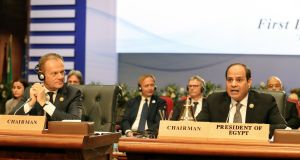 The president of the European Council, Donald Tusk, and Egyptian president Abdel Fattah al-Sisi at the opening of the EU-League of Arab States summit in Sharm el-Sheikh, Egypt. Photograph: EPA/Khaled Elfiqi

Destination countries for refugees and the countries which they leave must work together to break the business model of people smugglers, the president of the European Council has told the first EU-League of Arab States summit.

The summit in Sharm el Sheikh, Egypt, began on Sunday, and will continue on Monday, when Taoiseach Leo Varadkar is due give an address.

The event is being co-chaired by Donald Tusk, the president of the European Council, and Egyptian president Abdel Fattah al-Sisi. The Taoiseach was welcomed to the gathering on Sunday by Mr al-Sisi.

Opening the summit, Mr Tusk said “proximity and interdependence” required the EU and LAS, which comprises 22 nations, to work together.

“Fostering intercultural dialogue, empowering a vibrant civil society and prioritising education and opportunity can help create peaceful and stable societies, less susceptible to the messages of violent extremism, and to counter-balance the negative impact that populist narratives can have on the resilience of our societies,” Mr Tusk said.

“On migration, I want to acknowledge and salute all those here who have shouldered the burden of population displacement, helped refugees and acted early to tackle people smuggling.

“We must work together – countries of origin, transit and destination – in order to break the business model of smugglers and traffickers who lure people into dangerous journeys and feed modern day slavery.

To address the root causes of migration and displacement. To stop irregular migration, and facilitate returns, readmission and reintegration. And also to ensure the protection of refugees and their rights, in line with international law.”

His comments were echoed ahead of the summit by Mr Varadkar, who told reporters: “Migration is a huge issue for large parts of Europe. Perhaps not so much in Ireland as it is for other countries, but we are very keen to demonstrate solidarity with other EU countries, and that means working to disrupt people smuggling and illegal migration where it is occurring. It means working with transit countries and countries of origin to improve living conditions in those countries as well.

“And it also means improving our external border security, and Ireland is taking part in that through the Irish Navy in the Mediterranean.”

Of 28 EU heads of state and government, 24 are in attendance at the summit. French president Emmanuel Macron is the highest profile European absentee. Among the Arab attendees is King Salman bin Abdulaziz Al-Saud of Saudi Arabia.

The EU would like to see a greater willingness among Arab states, some of whom also receive high levels of refugees, to take some refugees back to the region.

Energy issues are also being discussed, as are other Middle East matters such as the Iran nuclear deal and the Israeli-Palestinian conflict.