State would never have recovered under Fianna Fáil – Kenny 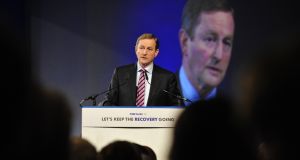 An Taoiseach Enda Kenny at the Fine Gael Ardfheis at the Citywest hotel in Dublin. Photograph: Aidan Crawley

The country would have never recovered under a Fianna Fáil government, Taoiseach Enda Kenny has said.

Addressing his party’s ardfheis the Fine Gael leader said the party left the country in the depth of a crisis.

He said: “I heard some incredulous comments last weekend when I heard them shamelessly claiming that what we really inherited from them was a plan.

“If that wreckage of a plan had been implemented, then the country would never have recovered.

“Because their so-called plan would have been a total disaster.”

Mr Kenny said the country has recovered but there are still many who have not felt the benefits.

It was the aim of Fine Gael to ensure every corner of the country benefited, the Taoiseach added.

Mr Kenny said the economy remains fragile and its recovery should not be underestimated.

He said: “Too many times in the past job security and economic progress were taken for granted. Not this time and not with Fine Gael in charge.

“Now is not the time for complacency in the face of a dangerous combination of international risks.”

The Taoiseach said this election would be crucial and people will have a very clear choice.

Mr Kenny said that would be a choice “between a clear plan to keep the recovery going; or putting the peoples’ hard-won progress at risk by going back to those who wrecked the country in the past or to those whose populist promises would wreck our future by blowing a huge hole in the national finances”.

More than 3,000 delegates are to attend the party’s conference at the Citywest hotel in Co Dublin.