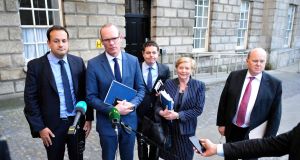 Fine Gael and Fianna Fáil have agreed the outline of a deal on Irish Water that should allow a minority government to be put in place next week.

At the centre of the agreement is the suspension of water charges until a new charging system with generous allowances is put in place and a process that will see Irish Water changed from a commercial entity to a public utility.

Both sides last night expressed cautious optimism a deal can be hammered out by tomorrow.

The deal on water, which would see Irish Water’s debts remain on the State’s balance sheet, clears the way for a broader arrangement between the parties to facilitate the operation of a minority government.

The new charging system will be based on conservation and it was claimed the new allowances will be generous enough to cover normal family usage. A comprehensive system of waivers, meaning pensioners who qualify for the household package and other social welfare recipients will no longer have to pay any charges, is also expected.

The net effect will be that a significant proportion of households will no longer have to pay water charges. Those who continue paying will be given a larger allowance, which should result in smaller bills. Technical details were being worked on overnight and are expected to be discussed when talks between the parties resume.

The breakthrough came after a meeting yesterday morning between acting Taoiseach Enda Kenny and Fianna Fáil leader Micheál Martin which came after the negotiating teams reached deadlock on the water issue.

The two leaders spoke again by phone in the early afternoon before the two teams resumed talks in Trinity College Dublin. It is understood there was rapid progress on the basis of the understanding arrived at between Mr Kenny and Mr Martin, and when the talks adjourned after two hours, the outline of a deal was in place.

The development involves significant concessions by both parties. There will be some anxiety in Fine Gael at the implications of the decision to transform Irish Water into a State agency but the party will be happy a national utility remains. There is now no prospect of getting Irish Water’s debts off the State balance sheet, which means there will be less money available in budgets over the next three years for infrastructural projects and improvements to services.

The agreement should clear the way for a deal on how a minority government will operate. Fine Gael will seek to conclude negotiations with Independent TDs to establish how many of them will be prepared to get involved in a minority government. Labour yesterday definitively ruled out going back into coalition.

There were no further discussions with Independents pending the outcome of the talks between the parties but it is thought they can be wrapped up at the weekend.

Fine Gael needs to persuade at least six more Independents to vote for Mr Kenny as taoiseach when the Dáil meets next Tuesday.