Major review of legacy inquests due to begin in September 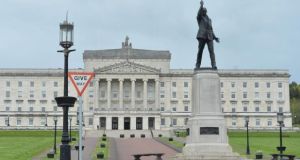 The measures are part of a Government attempt to co-operate with the legacy institutions to be established under the Stormont House Agreement.

Gardaí would be permitted to give evidence at legacy inquests in Northern Ireland under legislation being progressed urgently by the Government.

The Cabinet is acting on proposals to give a “concrete assurance” that the Government is committed to the “full implementation of the legacy mechanisms” set out under the 2014 Stormont House Agreement.

Under the Criminal Justice International Cooperation Bill 2019, the testimony of Garda members can be made available to the Northern Ireland coroner conducting inquests into Troubles era events.

Testimony can also be made available to other coroners’ inquests being undertaken in the UK if there is a substantial connection to the State.

The Cabinet also wants to allow the Garda Commissioner, on behalf of the force and with the prior consent of the Government, to enter into agreements with non-law enforcement bodies outside of the State.

These agreements may allow for co-operation between the parties or exchange of information.

The Attorney General previously said, in relation to the Northern Ireland coroner’s inquest into the murders of 10 people at Kingsmill, Co Armagh in 1976, that current laws do not give gardaí a legal basis for the sharing of information with civil organisations outside the State.

“The publication of this Bill, and its swift progress through the Oireachtas, will be a concrete assurance on the part of the Irish Government of its commitment to full implementation of the legacy mechanisms settled under the Stormont House Agreement,” the Department of Justice said.

“The implementation process has been unduly delayed by the political situation in Northern Ireland and at Westminster, and publication and enactment of this Bill by the Irish Government will act as an important stimulus for further action on the legacy framework from all parties to the Stormont House Agreement.”

The measures are part of a Government attempt to co-operate with the legacy institutions to be established under the Stormont House Agreement, namely the historical investigations unit and the independent commission on information retrieval.

A major review of legacy inquests is due to begin in September.