Stalemate as Dáil adjourns after failing to elect new taoiseach

Government will make no key decisions without consultation as stalemate continues 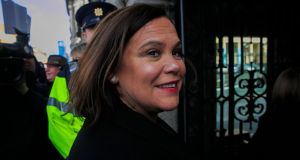 Mary Lou McDonald won the most votes but, like her competitors, was nowhere near securing a majority. Photograph: Gareth Chaney/Collins

Sinn Féin leader Mary Lou McDonald won the highest number of votes for the position of taoiseach in the Dáil on Thursday, but neither she nor the other candidates for the post – Leo Varadkar, Micheál Martin and Eamon Ryan – came close to winning a majority.

The Dáil will now adjourn for two weeks, during which the parties are expected to have further discussions, but there was little sign yesterday that the stalemate that has emerged since the general election is likely to be broken in the near future.

The Fianna Fáil leader Micheál Martin said he would seek to speak to other parties but firmly ruled out talking to Sinn Féin about a possible coalition. In a lengthy Dáil speech on Thursday night, he laid out sharp differences with the party over its policies, because Ms McDonald had “praised Provisional IRA units” and over his view of Sinn Féin’s democratic standards.

Mr Varadkar said it was up to the parties who had made promises of change to voters to now see if they could put together a government to deliver that change, or to tell voters why they could not.

Mr Varadkar spoke to Mr Martin last night and they agreed to meet next week.

Mr Varadkar left Dublin last night for Brussels, where he will join a special summit of EU leaders that began on Thursday afternoon. Before he left, Mr Varadkar travelled to Áras an Uachtaráin, where he tendered his resignation as Taoiseach to President Michael D Higgins, though he and the rest of the Ministers of the Government will remain in office in a caretaker capacity until a new taoiseach is elected by the Dáil.

Mr Varadkar said his caretaker Government would not make new policy decisions, financial decisions or appointments unless necessary and then not without consulting with Opposition leaders.

Ms McDonald won the most votes, 45, but with 84 votes against her the Sinn Féin leader, like her competitors, was nowhere near securing a majority.

She won the support of some Independents and the five People Before Profit/Solidarity/Rise TDs, though they earlier made it clear their backing was not intended to strengthen her hand in any negotiations with Fianna Fáil. They continue to push for a left-wing minority government, led by Sinn Féin, insisting that both Fianna Fáil and Fine Gael should “step back”.

The large margin of defeat in all the votes demonstrated the difficulty faced by all party leaders in assembling sufficient votes for a majority in the Dáil. Although parties said they would continue with discussions over the coming days, there appears little sign of a breakthrough.

Earlier, the Dáil re-elected Kildare TD Sean Ó Fearghaíl to the position of Ceann Comhairle after a secret ballot.

Mr Ó Fearghaíl told TDs this was a challenging period but the Dáil had shown “we can be very decisive indeed when we put our minds to it”.