Vicious incidents because of an ongoing drugs feud in north Dublin, TD says 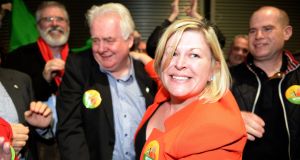 Sinn Féin TD Denise Mitchell said she understood the pressures on gardaí to implement the emergency legislation dealing with the coronavirus crisis but day-to-day crime had not stopped. File photograph: Eric Luke /

Vicious attacks including stabbings, shootings and assaults with hammers have been carried out during the Covid-19 pandemic in communities on Dublin’s northside, the Dáil has been told.

Sinn Féin TD Denise Mitchell said she understood the pressures on gardaí to implement the emergency legislation dealing with the coronavirus crisis but day-to-day crime had not stopped.

In recent weeks there had been vicious incidents because of an ongoing drugs feud in her Dublin Bay North constituency, she said.

There had been “stabbings, shootings and young lads in their community being attacked with hammers”.

Ms Mitchell said people in her constituency “should be able to go outside their door without worrying if they would be caught up in any of these incidents”.

Grandparents are afraid for their grandchildren and young people are afraid to go out, she added.

Ms Mitchell said prevention was the most effective way to deal with this and community policing was key but the numbers of gardaí in Coolock had fallen significantly since 2012.

She was speaking during a debate on community policing. Minister for Justice Charlie Flanagan acknowledged the challenges, highlighted the north inner city taskforce to deal with drugs feuds and pointed to a 20 per cent increase in gardaí in Coolock where there are now 247 gardaí.

Aontu leader Peadar Tóibín said there should be a fair distribution of gardaí in communities based on their populations as he highlighted anti-social behaviour in his Meath West constituency where he said petrol bombs were thrown in the middle of the day.

Opening the debate the Minister said there had been a 25 per cent increase in reporting of domestic abuse incidents during the Covid-19 pandemic and gardaí had moved to the second phase of its Operation Faoiseamh initiative on domestic abuse to target perpetrators.

The first phase involved contacting victims who had reported domestic abuse in the past. Gardaí are now targeting offenders “and in particular, cases of persistent breaches of protection, safety and barring orders under the Domestic Violence Act”.

Mr Flanagan also said that 16 divisional protection service units, with a victim-centred approach had been rolled out across 15 Garda divisions.

Expressing his horror at events in the US with the killing of George Floyd, Mr Flanagan said it was far from the reality in Ireland in large part “because of the close relationship the Irish people have with their local gardaí”, who are largely unarmed.

Fianna Fáil justice spokesman Jim O’Callaghan said Irish people wanted to see more gardaí because they are a community police force rather than as a law enforcement agency as in the US.

Green party TD Roderic O’Gorman highlighted the barriers to diversity of recruitment to An Garda Síochána. The Minister told him there had been “specific engagement” by the Garda Commissioner to broaden the composition of the force.

A recent recruitment advertisement was published in Arabic while career, information leaflets were published in a number of languages and gardaí were involved in school liaison visits to promote careers in An Garda Síochána.

Sinn Féin spokesman Martin Kenny praised the work of gardaí during the pandemic but he said there were occasions among gardaí when “there is a little bit of an attitude, particularly towards young people who come from a particular background”.

He said there was a need to train gardaí in how they deal with youngsters who are vulnerable to go in a particular direction that their attitude towards them doesn’t push them further in that direction and that sometimes can happen”.