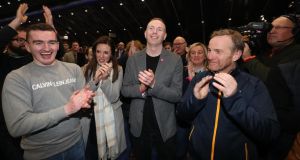 The outgoing MP Chris Hazzard, who first won this seat from the SDLP two years ago, has regained it for Sinn Féin with a majority of just over 1,600 votes.

South Down was one of the three seats that the SDLP lost in 2017 – the others were Foyle and Belfast South – when Mr Hazzard defeated the former SDLP leader Margaret Ritchie, who has since moved to the House of Lords as Baroness Ritchie of Downpatrick.

Mr Hazzard won two years ago with a majority of 2,446. The SDLP entertained some hopes that its candidate, Michael Savage, would give Mr Hazzard a good run, but in the end the Sinn Féin man came through.

Nonetheless, the SDLP will be happy that Mr Savage polled well when the expectation was that Mr Hazzard would pull further ahead of the SDLP.

Mr Hazzard said people had stood up for the interests of South Down in the face of the “catastrophe of Brexit”.

Mr Savage, of the SDLP, said he “fought a hard fight with a great team” and believed he and the SDLP had “put up a very credible performance”.