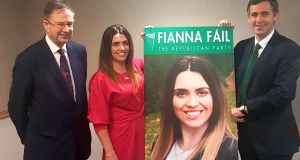 Fianna Fáil has announced its first ever candidate to stand in an election in Northern Ireland.

Sorcha McAnespy will stand in next May’s local election.

Fianna Fáil, currently the main opposition party in the Irish Republic, is expected to unveil a number of other candidates in the time ahead.

Ms McAnespy, a member of Fianna Fáil’s National Executive, is already an independent councillor for Fermanagh and Omagh District Council.

Party leader Micheal Martin, who has long pledged to contest elections north of the Border, has informed her she will be a Fianna Fáil candidate next May.

The move comes amid ongoing speculation that Fianna Fáil might ultimately merge with the SDLP to run in future Northern Ireland elections.

The men will be her joint campaign managers.

“I am delighted Deputy O’Cuiv and Senator Daly agreed to come to Omagh this evening to launch my campaign following my invitation and have both agreed to be my campaign managers,” Ms McAnespy said.

‘The first of many to come’

Established in 1926, Fianna Fáil has long claimed to be Ireland’s true republican party.

As such, it has long faced questions on why it would not contest elections on a 32 county basis.

Its eventual decision marks a significant move in the political landscape on the island and comes when the debate over Irish unity has gained renewed traction due to Brexit.

“I believe that Fianna Fáil standing in the North will help to give proper representation to the people concerned with the day-to-day issues, we will offer fresh thinking and challenge the status quo of Sinn Fein and DUP which has led to the shutting of Stormont and dysfunctional politics,” he said.

Senator Daly said he expected the launch to be the “first of many to come”.

“Fianna Fáil have a vision for Omagh, Tyrone, Northern Ireland and the whole island that encompasses but also listen to views from across the spectrum, as a party we are strong enough in our identity so that we can reach out to others and realise that a shared future is possible,” he said

At the event, councillor McAnespy said “all politics is local”.

She said: “My constituents concerns are the lack of investment, cuts to funding for education, pressures on our health services, shortages of staff in front line services, waiting lists for people with mental health problems, disproportionately high levels of suicide, crumbling infrastructure causing road deaths, lack of accessibility to public transport.

“Housing shortages, increasing cost of living, lack of broadband. We in Fianna Fáil are here to listen to these concerns and work to address them.”