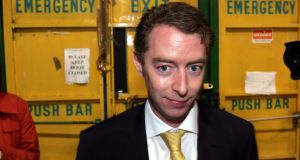 Cllr Shay Brennan has the edge in the Fianna Fáil Dublin South selection convention which is in his father’s old constituency where Mr Brennan senior served as a TD from 1981 until his death in 2008. Photograph: Matt Kavanagh/The Irish Times

A Senator and two councillors, including the son of the late minister Séamus Brennan, go head-to-head at the Fianna Fáil Dublin South selection convention which takes place on Monday night.

After boundary revisions in 2012, Dublin South constituency will move from being a five to a three-seat constituency under the new name of Dublin Rathdown after major geographical changes.

Dundrum-based Cllr Shay Brennan goes into the running against Senator Mary White, co-founder of Lir Chocolates, and Stillorgan-based Cllr Liam Dockery, a barrister. Both councillors were elected in 2011 for the first time. Ms White has been a Senator since 2002, elected to the industrial and commercial panel.

Mr Brennan has the edge in the contest in his father’s old constituency where Mr Brennan senior served as a TD from 1981 until his death in 2008 and is one of the Dublin constituencies where the party believes it can win a seat.

He failed to take a seat in the Dublin South byelection in 2009 following his father’s death, won by Fine Gael’s celebrity candidate George Lee who garnered 54 per cent of the vote.

Maria Corrigan ran for the party in the 2011 general election, trailing in sixth place in the volatile constituency.

Next week’s selection race follows controversy in the party’s Dublin West convention when Castleknock-based Cllr Jack Chambers defeated Corduff-based Cllr David McGuinness who had run for the party in the last general election and in two byelections.

Mr McGuinness was angry after his defeat, said it was a bitter pill to swallow and claimed there was a class war going on within Fianna Fáil.

The party has targeted a number of constituencies where it believes it can win two seats, all of them outside Dublin.

Fianna Fáil expects to complete all selection conventions in time for the ardfheis at the end of April.