Opinion: Those in favour of same-sex marriage need to develop a campaign independent of political parties 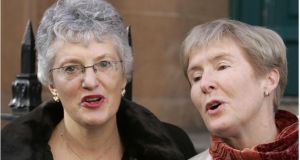 When the Children’s Rights referendum was being held in 2012, I took two months off to campaign in favour of it. Many of my friends thought I was daft. “Sure it’s going to pass. Everybody’s going to vote yes! Who would vote against rights for children?” Well, quite a number did: 42 per cent – and that was despite the fact that no political party and none of the major churches had opposed it.

This is a conservative country – Ruairí Quinn says that at every election when Labour gets a smaller vote than it expects. We are particularly conservative when it comes to family. Politicians who want to change anything to do with the family tread warily and prepare the ground well. The first divorce referendum was defeated because the legislative groundwork had not been done to ensure that first families would be provided for. The Fine Gael Labour coalition did not make that mistake in the 1995 referendum – but even then it was only passed by less than 1 per cent.


Same-sex marriage
Now we face the issue of same-sex marriage. Why should it matter that this is a conservative country if marriage equality is a human right, which it is? Why shouldn’t we simply legislate for marriage equality and be done with it. The answer is that this issue is probably going to end up needing a constitutional referendum no matter what way you proceed, and the passing of that referendum will require a job of level-headed persuasion and even education of that substantial part of our electorate who are conservative.

Those who argue that we should forget a referendum and simply legislate say there’s no constitutional barrier, that the Constitution doesn’t define marriage. However, the courts have interpreted the Constitution as meaning that marriage is between a man and a woman. The Government’s legal advice is that therefore constitutional change is needed. So if the Government were to go ahead and legislate, that legislation might well end up being struck down as unconstitutional by the courts. We would then end up having to call a referendum with an alienated electorate, angry at being bypassed in the first place.

This also assumes that the Government, or at least Fine Gael, would be ready to legislate for marriage equality. But when you talk to Fine Gael TDs, they say they want to wait and see what the people say in a referendum. They’re not going to move without cover from the electorate. And the Taoiseach isn’t exactly enthusiastic about it either. After Christmas, he said he did not agree with Eamon Gilmore that same-sex marriage is the civil rights issue of our generation. That didn’t mean, he said, that he didn’t support it and that he wouldn’t campaign for it in a referendum.


Referendum
So a referendum it is, both for legal and political reasons. I think it’s important that those campaigning for marriage equality accept that and direct their energies towards passing it. There will be well organised and effective opposition to them, including, by all indications, the Catholic Church. All the main political parties are in favour of the measure but that’s a mixed blessing. Will they campaign, and even if they do, will people use the opportunity to punish government parties for cuts and increased taxes, no matter what the referendum is actually about?

That’s why those in favour of same-sex marriage need to develop a campaign independent of political parties and on as broad a front as possible: farmers, teachers, business people, accountants, nurses, publicans, sportsmen and women, people who are gay and people who aren’t, but who will be able to reach into every corner of this society and put their case. Some of them will be dazzlingly exotic and some of them will be dead ordinary and both are needed to get this measure passed. And the language they use needs to be the everyday language of human relationships: love, loyalty, commitment, patience, respect.


One question
Speaking of respect, I spoke to a woman yesterday that I respect enormously, Senator Katherine Zappone, who is with Dr Ann Louise Gilligan taking a High Court case to challenge two pieces of legislation, the Civil Registration Act and the Civil Partnership Act, which ban same-sex couples from marrying. She put to me one question about a referendum: “Do you think it’s right that Ann Louise and I should have to ask heterosexuals for permission to marry?”

No, I don’t. But neither do I think that I and other Irishwomen should have to go out and ask the Irish people for the right to choose to have an abortion. Yet I know that I will have to ask that question through a referendum in my lifetime. Sometimes you have to fight for your rights – as lesbian, gay, bisexual and transgender campaigners know all too well. And one of the most effective weapons in that fight is persuasion.