‘We have contained the worst of Fine Gael’s right-wing tendencies,’ Dara Calleary says 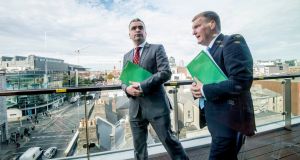 Fianna Fáil has said there will be a small decrease in the Universal Social Charge (USC) in the budget, probably in tandem with an increase in the threshold for the higher rate of income tax.

Party finance spokesman Michael McGrath and public expenditure spokesman Dara Calleary also said they were confident there would be at least a two-to-one ratio between spending and tax concessions. The TDs were speaking as they announced details of the party’s pre-budget submission.

Mr Calleary said Fianna Fáil’s influence in pressing through the principles of confidence and supply had ensured a more centre-left leaning budget. “We have contained the worst of Fine Gael’s right-wing tendencies,” he claimed.

The party spokesmen said they said they wanted a balanced budget and agreed with Fine Gael that budgets must adhere to fiscal rules.

“There will be a further reduction in USC with an emphasis on low- and medium-income levels,” Mr McGrath said.

Cautioning it would be modest, he said: “It’s not Fianna Fáil egging up expectations. “It is important for people to see net pay moving in the right general direction, albeit at a very gentle pace next week [in the budget].”

Asked about how his negotiations had gone with new Minister for Finance Paschal Donohoe, Mr McGrath said they had been more formal than those with his predecessor Michael Noonan with whom he had built up a good relationship over seven years.

Mr Calleary also indicated there would be a rise for people who rely on welfare payments. “We think those on fixed incomes should also get an increase,” he said.

Mr McGrath was highly critical of the banks for redress and compensations packages they had offered to customers overcharged on mortgage interest. He called on the Central Bank to take a more active role.

The Cork South Central deputy also said the Coffey report into corporation tax should be implemented in full, which would bring in more revenue.

He also expressed some doubt on the timing of the sugar tax. It is earmarked to coincide with the introduction of similar taxes in Britain but there are indications they might not go ahead as scheduled in the spring of next year.

Mr McGrath also said he had read the report on the Help-to-Buy scheme for first-time buyers of homes, which was introduced as a central part of the Rebuilding Ireland strategy last year. He would not divulge the contents on the basis of confidentiality but indicated that there were recommendations that would necessitate change.

“The future of the scheme would have to be based on the evidence of the report.

“We sought an independent impact assessment of the scheme.

“Our ask is that decisions be made consistent with the report. The impact assessment should have been done before the scheme was introduced.”

Other Fianna Fáil priorities include a reduction in childcare costs; an expansion of the tax credit for home carers; a budget of €55 million for the National Treatment Purchase Fund in 2018; a reduction in prescription charges; an increase in third-level funding; and a reduction in the average class size.

The is the second year of the Confidence and Supply agreement between both parties, which commits Fianna Fáil to support the passing of three budgets, based on certain agreed conditions laid down in the document.