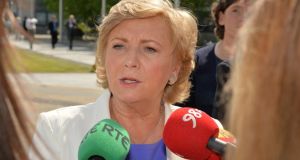 Minister for Children Frances Fitzgerald: “I am advised by the HSE that six minors who were in State care were assisted in travelling abroad for abortions since 1992,”

Six girls under the age of 18 in State care were assisted in travelling abroad for abortions on suicide grounds in the past 20 years, Minister for Children Frances Fitzgerald has confirmed.

In each of the cases a psychiatrist was involved in providing an assessment of the mental health needs of the minor, while in four of the cases a court hearing was convened.

“I am advised by the HSE that six minors who were in State care were assisted in travelling abroad for abortions since 1992,” Ms Fitzgerald said.

She said the circumstances in each case were complex and unique to the individual involved. “In the interests of confidentiality and given the very low numbers involved the HSE is constrained from providing details of the individual cases.

“The HSE has confirmed that it acted within the legislation and in the best interests of the children involved in all cases.”

Available figures
In 2011, the most recent year for which figures are available, a total of 37 girls under the age of 16 seeking abortions in England and Wales gave addresses in the Republic. A total of 111 girls aged 16 or 17 also travelled for abortions.

These figures are an underestimation, according to the Irish Family Planning Association (IFPA), because not all women resident in the Republic provide their Irish addresses for reasons of confidentiality.

On the issue of the figures relating to under-18s in State care, Ms Fitzgerald was responding to a Dáil question this week from Fine Gael TD Billy Timmins. He yesterday became the third of his party’s TDs to confirm they would not support the Protection of Life During Pregnancy Bill. Peter Mathews and Brian Walsh have also objected to the suicide clause.

Mr Timmins, in a parliamentary question, asked how many girls in State care were “taken” to Britain or elsewhere for an abortion “following a court decision, following testimony from a psychiatrist for the State that she was suicidal”.

He asked for the psychiatrist in each case to be identified, but this was not provided. While he requested a figure for the years 1998 to date, the answer related to the years from 1992.

Yesterday Mr Timmins described the response as “worrying” and asked: “If this legislation is about saving women’s lives, why was the treatment not provided in Ireland?”

The Department of Health has said the issue of consent for minors for access to medical treatment is not covered in the Bill, “but is one which needs to be addressed separately”.

1 One hundred Irish retailers for all your online Christmas shopping
2 Covid-19: Backlog forces HSE to skip calls to thousands of close contacts
3 Suzanne Lynch’s US Election Diary: Trump ‘walks out’ of TV interview at White House
4 ‘Groundbreaking’ direct provision replacement forecast to save millions
5 Covid-19 Explainer: Why is the contact tracing system getting swamped?
Real news has value SUBSCRIBE