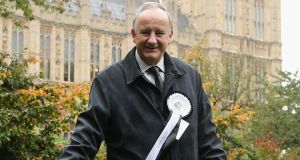 Laurence Robertson, Conservative MP who chairs the NI affairs committee, said he was surprised and disappointed that Sinn Féin had refused to answer questions about the on-the-runs scheme. Photograph: Dan Kitwood/Getty Images

The unravelling of the agreement reached with the British government over so-called on-the-runs (OTRs) would set “a dangerous precedent”, Sinn Féin has warned a House of Commons inquiry.

“The agreements which collectively make up the peace process must be honoured by those who have inherited their implementation,” the party said in a document submitted to the Commons’ Northern Ireland Affairs Committee yesterday.

Nearly 230 Republicans – 95 of whom have been linked to 200 murders – were given letters by the Northern Ireland Office outlining whether they were wanted for prosecution or not.

However, while Sinn Féin submitted a document to the committee, it refused to appear before it because it was “politically partisan” and dominated by its political enemies.

Meanwhile, the most senior official in Northern Ireland’s Department of Justice, Nick Perry, said that while the NIO letters to republicans may have been “distasteful”, they were neither unlawful nor immoral.

British ministers justified the letters on the basis that they “were trying to bring peace” to Northern Ireland, he told MPs during the first of two days of hearings at Stormont.

“The law officers oversaw the operation; the independent prosecution authorities were involved in it. In trying to bring peace to Northern Ireland there were many difficult, uncomfortable issues,” he said. In February, a London court ruled that Co Donegal man John Downey could not be tried for the 1982 IRA Hyde Park bombing because he was mistakenly given a letter saying he did not face prosecution.

Conservative MP Laurence Robertson, who chairs the NI affairs committee, said he was surprised and disappointed that Sinn Féin had refused to answer questions about the on-the-runs scheme.

Democratic Unionist MP David Simpson said Sinn Féin’s “reluctance to be cross-examined in public” about the background to and the operation of the scheme “speaks volumes”.

However, Sinn Féin’s Gerry Kelly said they would “fully and willingly” co-operate with a separate inquiry led by a British high court judge, Lady Justice Hallett.

The British and Irish governments had agreed in 2001 in Weston Park that the issue of the on-the-runs had to be addressed and agreed that they would “no longer be pursued”, he wrote.

Later, the MPs will question chair of the Northern Ireland Policing Board Anne Connolly and chief executive Sam Pollock, along with one of its members, Brian Rea.