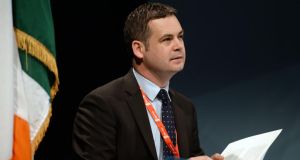 Sinn Féin has committed to not participating in a Government which is led by Fine Gael or Fianna Fáil after the General Election.

The party’s finance spokesman Pearse Doherty said the Government was “drunk on power” as he called on the ardfheis to vote in favour of not entering a Fine Gael or Fianna Fáil-led coalition.

He said the Government had “picked up the Fianna Fáil playbook and took it to a whole new level”, leaving people feeling betrayed.

“For over 90 years, Fianna Fáil, Fine Gael and Labour have failed in Government...So we have no interest in propping up failed parties for the benefit of ministerial position. That is what the Labour Party is for,” he said,

“Let us from this ard fheis commit ourselves that Sinn Féin will not enter into a Fianna Fáil or Fine Gael-led Government.”

Mr Doherty said Irish citizens were “yearning for change”. They watched Fine Gael and Labour party conferences on television and asked themselves, “What planet are these people from?”

He said growing numbers of people recognised Sinn Féin was the only party that could deliver that change.

He said politicians from other parties judged their success by the size of their pension pots, but that was not the Sinn Féin way.

“We have a leadership team put lives and liberty on the line because it was the right thing to do.”

Mr Doherty said the media was obsessed with the mathematics of possible coalition arrangements. “It’s not about who you go into government with but what you want to achieve in government.”

“Let me be clear. Sinn Féin want to lead a government which will deliver fundamental change.”

Dublin councillor Eoin Ó Broin said the next General Election could be a “game-changer” because it would give voters the opportunity break Fianna Fáil/Fine Gael “stranglehold” on Irish politics.

“But this can only happen if Sinn Féin makes a clear and unambiguous statement that we will not under any circumstance support a Government led by Fianna Fail or Fine Gael,” Mr Ó Broin said.

“We need a left-led Government in Leinster House,” he added.

Dublin Councillor Michéal MacDonncha also said the motion should be supported, in order to “smash” the current system.