Mary Lou McDonald: ‘This is us saying we believe that we are ready’ 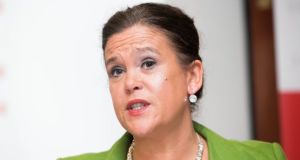 Sinn Féin passed a motion at its ardfheis on Friday evening agreeing to enter coalition as a junior party in Government.

Despite a number of reservations expressed by delegates, the party confirmed it was willing to consider entering coalition as a minority party.

Some members expressed fear Sinn Féin would suffer the same fate as the Labour party or the Green Party.

Others stated concern the party would lose credibility if it aligned itself to Fianna Fáil or Fine Gael.

However, the party’s finance spokesman Pearse Doherty insisted Sinn Féin must look at any proposal for government and judge each one on its merits.

This is not about power but change, Mr Doherty said, adding the final decision would be made by the members of the party at a futher special convention.

Sligo/Leitrim TD Martin Kenny said Sinn Féin was right to be cautious about entering a coalition but it must make itself uncomfortable and take risks to ensure the party had a voice in government.

“We must ensure we do nothing to give our opponents an excuse to beat us.”

Wicklow TD John Brady told delegates that tying the party’s hands on this matter would ensure Sinn Féin remained on the opposition benches in the Dail.

He accused Fianna Fáil of carrying out heinous crimes against the Irish people and alleged Fine Gael was a right-wing party led by a leader similar to leader of the French National Front Marine Le Pen.

However he insisted a government with Sinn Féin would be progressive and effective.

The party’s deputy leader Mary Lou McDonald confirmed the vote meant Sinn Féin was willing to go into coalition with Fianna Fáil and Fine Gael after the next election.

Ms McDonald said it was clear Fianna Fáil and Fine Gael did not want Sinn Féin to enter Government.

However she said a “level of respect should be afforded to the electorate and to the people” to choose the next government.

“We are serious and our membership are serious not just about formulating effective policies but delivering them,” she said.

“This is not about signing up to say we want to be a junior party, this is us saying we believe that we are ready. We have made it clear we will talk to anybody after the election. I do not think it is fundamentally democratic to think they have a divine right to discount others.”

The shift in position will come after the ardfheis considers a motion to allow Sinn Féin into a coalition government.

A decision will have to be taken by a special ardfheis, convened for that purpose, and “will be based on the party’s ability to secure a progressive, Republican programme for government”.

Fianna Fáil and Fine Gael have both stated they are unwilling to enter any agreement with Sinn Féin.

Ms McDonald was also questioned about the party’s position on the Eighth Amendment and the view of Meath West TD Peadar Tóibín, who is opposed to the legalisation of abortion.

Mr Tóibín is seeking a free vote for party members on the matter but Ms McDonald insisted it was essential Sinn Féin had a position on the issue.

She said: “Political parties have to deal with all of the issues including the difficult ones and unlike the other political parties we don’t run away from our responsibility in that regard.”