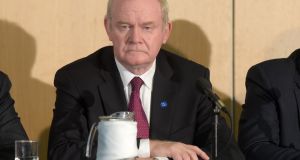 Martin McGuinness: British government has forfeited any mandate to represent the economic or political interests of the people

Sinn Féin has said it will intensify its push for a Border poll on a united Ireland following Britain’s decision to exit the European Union.

Northern Ireland Deputy First Minister Martin McGuinness said the referendum result in favour of Brexit means the “British government has forfeited any mandate to represent the economic or political interests of the people” in the North.

Northern Ireland voted in favour of remaining in the EU, but by a smaller margin than had been anticipated. On a turnout of 63 per cent, 55.8 per cent of people voted to remain in the EU while 44.2 per cent opted to leave. Turnout in nationalist areas was relatively low.

Scotland also voted to remain, while England and Wales voted to leave.

Mr McGuinness said the result intensifies the case for a poll on a united Ireland.

Mr McGuinness said Sinn Féin would seek a meeting with the Irish Government, the European institutions and also with our counterparts in Scotland to discuss how we move forward in the best interests of all of our people”.

“The people of the north of Ireland, nationalists, republicans, unionists and others have made it clear at the polls that they wish to remain in the EU,” he added.

“The British government now need to take account of that and recognise that reality and allow the people of the north to have their say on their own future. Dragging us out of Europe will be to the detriment of all our citizens and will be bad for business, trade, investment, and wider society,” said Mr McGuinness.

Sinn Féin president Gerry Adams travelled to Belfast to give his reaction to the vote. Outside a rain-soaked Stormont Castle, he said the decision would impact everyone North and South.

He said: “This affects all of Ireland, whatever our attitude to the constitution or to the union or whatever. This affects everybody on this island.

“We all are part of a process of bringing about equality and change and harmony and reconciliation here and unless we are very careful a lot of the hard work that has been done, particularly around equality, rights, can be undone.”

Declan Kearney, a member of the Stormont Assembly and national chairman of Sinn Féin, said the vote in England overturned “the democratic will of people here in the north of Ireland, republican and unionist, Catholic and Protestant people (who) have voted in favour of Remain”.

“The British government as a direct result have forfeited any mandate to represent the interests of people here in the north of Ireland in circumstances where the North is dragged out of Europe as a result of a vote to leave,” Mr Kearney added.

“The outcome dramatically changes the political landscape here in the north of Ireland and we will be intensifying our case for the calling of a border poll under the provisions of the Good Friday Agreement.”

“I think that this is a good result for the United Kingdom, ” she said, speaking on Radio Ulster.

She said: “Our nation state has made a clear definition of where they want to go.

“They backed hope, they backed aspiration, the backed the future potential of the United Kingdom and I am very pleased with the result.

“We always knew it was going to be difficult to get a leave vote in Northern Ireland given that four out of the five main parties were advocating a remain vote.

“I am very pleased with the result this morning.”

“There is no way even if there was a border poll that it would be favour of a united Ireland,” she said.

“People very clearly have moved to the position where they are quite content with the constitutional position of Northern Ireland within the United Kingdom.”

Mrs Foster said her plan in the time to come is to be “as involved as possible in the exit negotiations”.

In the wake of the result, SDLP leader Colum Eastwood MLA said Ireland’s interest, North and South, remains as part of the European Union.

Mr Eastwood said: “Yesterday Northern Ireland voted to remain as part of the European Union. Ireland’s rightful place is at the heart of Europe. That was true yesterday, it remains true today.

“There can be no return to a physical border across this island. There must remain freedom of movement for people, goods and services across Ireland.

“The negotiation to come must ensure that any border is only operational around the island of Ireland and not across it. This result must now ensure the full and fast integration of economic interests across Ireland.”

He said: “I will now be speaking with the leaders of Dublin parties to advance this work. I will open discussions on how we can defend the interests of the people of Ireland, North and South.

He said as a “continuing member” of the EU, the Irish Government wields “significant influence that it can exercise during the course of Brexit negotiations”.

“The Taoiseach is now the most important person on this island in deciding Ireland’s relationship, North and South, with the European Union. His Government has huge influence in this upcoming negotiation. He must now be a powerful voice on our behalf,” he said.