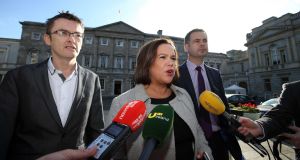 Sinn Féin TD David Cullinane (left) rejected criticism, saying “if there is a change in Sinn Féin pay it does not have an effect on the State”. Photograph: Sam Boal/Rollingnews.ie

Sinn Féin is to increase the pay of its TDs, Senators and MEPs to €39,000 after an internal party review.

The party has conducted an examination of its policy of paying only the industrial wage and decided it should end.

It is expected TDs, Senators, MEPs and parliamentary staff will now receive a €2,500 rise in their take-home pay, which is expected to be implemented from January, should it be approved when it goes before the party’s ard comhairle in December.

Fine Gael and Fianna Fáil TDs have criticised Sinn Féin for increasing their own pay while opposing TDs’ pay rises.

Sinn Féin has tabled a Private Members’ motion in the Dáil to prevent an automatic €2,700 increase in politicians’ salaries, due to take effect from April next year. A TD’s basic salary is €87,258, while a Senator is paid €65,000.

Fine Gael TD Noel Rock, who said he will not be claiming the rise in pay, said this showed “double standards”.

“Normally you’re either for or against something, but Sinn Féin are trying to be both. The brave thing would be to forgo their pay and actually giving it back to the taxpayer, instead of using TDs’ salaries to prop up their army of advisers.”

Sinn Féin policy dictates that public representatives, including TDs, Senators and MEPs, can only claim the average industrial wage which, according to the Central Statistics Office, is €36,500.

While TDs and Senators draw down their full salary, the party says most use the extra money on top of the €36,500 to hire additional staff or to open extra offices. They do not have to explain where their money is spent.

Sinn Féin will use its Private Members’ time in the Dáil tonight to encourage the Government to block next year’s salary increase for politicians due under the Lansdowne Road Agreement.

Mr Calleary, whose party will vote against the motion, as will the Government, said Sinn Féin “have negotiated themselves a pay rise so the notion of putting down this motion is hypocritical at the very least”.

Sinn Féin’s public expenditure spokesman David Cullinane said their opposition to the increase to politicians’ pay was not linked to his party’s decision.

“All Sinn Féin TDs draw down the full salary and what they do with it is for a matter for individual TDs.

“This [motion] is about whether TDs should get an increase in salary. People are conflating two issues.

“If there is a change in Sinn Féin pay it does not have an effect on the State. If we accept the pay rise, it does.”

The Dáil will debate the motion today and a vote will be scheduled for Thursday.