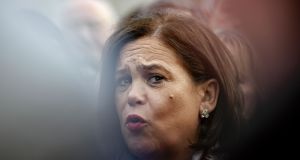 Mary Lou McDonald: ‘It’s an expensive business that isn’t covered by the expenses that we get.’ Photograph: Aidan Crawley/Bloomberg

Sinn Féin leader Mary Lou McDonald has said she does not have the authority to direct TDs to make a donation to the party and does not seek such authority.

She was answering questions about whether the party’s TDs took the industrial wage of just under €39,000 and donated the remainder of their annual €96,189 salary to Sinn Féin’s coffers.

Ms McDonald said that, for about the past five years, Sinn Féin TDs had taken their salary. “They make the maximum legal allowable donation to the party, which I think is €2,500.”

The Dublin Central TD said she used her salary to fund her constituency offices in Cabra and at the Five Lamps. “It’s an expensive business that isn’t covered by the expenses that we get,” she said.

She added that the financial relationship was between the Oireachtas and the elected member, “and we can’t inappropriately intervene in that”.

For years the party stated that all TDs took the industrial wage and donated the remainder to the party, but in 2018 it emerged that Dublin North West TD Dessie Ellis kept the full salary, which was then €93,598, and it appeared that other elected party members had a similar arrangement.

Asked about Mr Ellis’s exemption, Ms McDonald said: “It’s not so much an exemption as a fact that we cannot direct. I don’t have that authority nor do I seek that authority. But the practice is that people make the donation to the party and resources are used to build the constituency.

“I can vouch and verify that that’s the approach I take.”

Rumblings about the policy first emerged in 2012, when then TD Sandra McLellan admitted that she was finding it tough to survive on the then industrial wage of €34,000, and a number of TDs complained that other party members were being supported

But Ms McDonald said, “There’s nobody in Sinn Féin who is elected to any office for big careers or big money”.