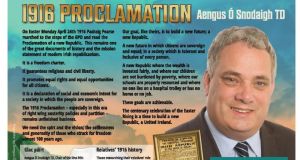 Aengus Ó Snodaigh’s leaflet: “Some people have been asking for more copies and looking to send them abroad to friends and relatives”

Documents released under the Freedom of Information Act (FoI) show he availed of a printing perk open to all TDs and Senators to create a full-colour “information newsletter” reproducing the Proclamation and providing his phone, email, Twitter and Facebook details.

The Dublin South-Central deputy was dubbed the “Wolfe Toner” in 2012 after it emerged he had used €50,000 worth of printer cartridges over an earlier two-year period.

Mr Ó Snodaigh told The Irish Times yesterday that his constituency team had already delivered half of the 20,000 Easter 2016 leaflets he said he had printed, which he said cost the Oireachtas just over €600.

“My previous experience and the furore that that caused is always at the back of my mind. But these have been well-received. People are sticking the Proclamation on their walls,” he said.

“Some people have been asking for more copies and looking to send them abroad to friends and relatives.”

Mr Ó Fearghaíl said he had 7,000 calendars printed and they had been “very well received” across his Kildare South constituency. “People are looking for more,” he said.

Meanwhile, the names of TDs and Senators who used the service to produce personalised 2015 Christmas cards were also released under FoI.