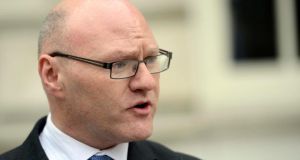 To relax, Sinn Féin’s Paul Maskey likes to hike on the Divis and Black Mountain walking trail that overlooks his West Belfast constituency.

“It’s great for clearing the mind,” he says. “A great public amenity too.”

But his walking in recent months has been confined to the roads and streets of the constituency which he took over from Gerry Adams in 2011 when the Sinn Féin president decided to concentrate on the Republic. “At this stage, we’ve rapped 15,000 doors in the constituency,” says Maskey.

One may wonder why he bothers being so conscientious about canvassing. After all, he strolled home in the 2011 byelection with a majority of more than 13,000 votes. The only question in terms of this contest is how big his majority will be; will Sinn Féin voters still rally to the flag in such numbers when the result is such a foregone conclusion?

But Maskey (47) and Sinn Féin want their people out on polling day on May 7th and will do the foot-slogging necessary to achieve that aim. This is not just about the House of Commons, where Sinn Féin MPs refuse to sit. It is also about staying connected, about consolidating and expanding the huge ground they have gained, about ensuring that when the next Assembly and local elections come around, the Sinn Féin brand, as usual, will be to the fore. It is part of the big islandwide project, so Sinn Féin don’t do complacency, even when their candidates are sure things.

Obviously, he won’t knock on every single door, because the Shankill is also part of his constituency, and it hardly needs saying that this staunchly loyalist part of west Belfast would not welcome Sinn Féin canvassers.

On his byelection victory four years ago, Maskey said he hoped to hold constituency surgeries on the Shankill Road. Even then that seemed too ambitious but the flags protest that erupted in the meantime meant it became utterly unfeasible.

However, Maskey insists he works as diligently for the Shankill loyalists as he does for the Falls Road republicans: if he can’t go to the Shankill, well then the Shankill will come to him. He says 50 per cent of people who attend his surgery on the Lower Falls Road close to Belfast city centre are from the greater Shankill area.

“It is a regret that I can’t [go to the Shankill] but one of the most positive things in all of this is that the people from the unionist and loyalist community are using our office in greater numbers than ever before. That is because they see we provide a service to them, and they see us getting results for them as well.”

Joyriding, youth unemployment, drugs, crime and antisocial behaviour remain big problems in west Belfast. Maskey says jobs and education are key to addressing these issues, while adding that in the past four years unemployment has dropped from just under 17 per cent to just under 11 per cent: “If you give people a job and you give them a good education then there is less chance of antisocial behaviour.”

Against such a shoo-in as Maskey, one would be forgiven for wondering why the likes of Alex Attwood for the SDLP, Frank McCoubrey of the DUP, Bill Manwaring of the UUP, Gerry Carroll of People Before Profit, Gerard Catney of Alliance, John Lowry of the Workers’ Party, Brian Higginson of Ukip and Paul Shea of the Conservatives would bother contesting the election in the constituency.

But for them too it’s a question of staying connected, of showing the colours and of hoping all the burning of shoe leather around the streets of West Belfast under the shadow of the Black Mountain and Divis will yield dividends in future Assembly and local elections.