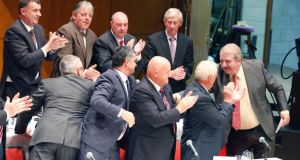 The formation of ruling coalitions on county councils yesterday, as well as new mayors taking up their chains of office, saw the changes ushered in by last month’s local elections come into effect.

A Sinn Féin Lord Mayor of Dublin will preside over the 1916 Rising centenary commemorations in the capital alongside the President and the Taoiseach, after the party succeeded in forming a ruling coalition on Dublin City Council.

Mansion House protocol stipulates that the mayor comes second only to the President at official ceremonies, making the office holder technically on a par with the Taoiseach.

Taoiseach Enda Kenny said Fine Gael pulled out of negotiations on the rotation of the role of Dublin mayor because of the uncertainty around reductions in property tax and commercial rates.

The local authority deals also saw arrangements between Fianna Fáil and Fine Gael, as well as others, in Kerry, Limerick, Dún Laoghaire-Rathdown and Fingal to secure governing majorities. However, in other councils, such as Louth, parties came together to keep Sinn Féin from office for the next five years.

Instead, Sinn Féin, the largest party on the 63-seat council with 16 seats, has entered into coalition with Labour, the Green Party and 11 Independent councillors.

The agreement will see Sinn Féin and Independents holding the mayoralty for two terms each with Labour holding it for a single term.

In a statement, the coalition, calling itself the Dublin City Alliance said it would commit itself to reducing the burden of the local property tax “subject to the powers available”. It would also commit “to continuing the previous council policy of not increasing commercial rates and, where possible, decreasing them”.

Outgoing mayor Kieran Dennison of Fine Gael took a swipe at “poorly thought-out” proposals to have a directly elected mayor in Dublin, and commended the courage of councillors who voted it down.

Ms Baker easily defeated Victor Boyhan (Ind) and Lettie McCarthy of Labour. She received 22 votes from the expanded 40-member council while Mr Boyhan received 11 votes from other Independents, People Before Profit councillors and Sinn Féin. The Labour candidate was supported only by party colleagues.DAN KEENAN

Mr Warfield (22) said he took “great personal pride” in becoming the youngest mayor of a local authority, as well as being an openly LGBT mayor. Mr Warfield represents the Templeogue-Terenure electoral area but said he wanted “to be a mayor for all of the people of this county”.

The party, which returned 10 councillors, failed to secure the chair or vice chair of the new 29-seat council at its gene- ral meeting yesterday.

Fine Gael councillor Oliver Tully secured the seat supported by Fine Gael (7 votes), Fianna Fáil (5), Labour (2), the Greens (2) and one of the three Independents. Mr Tully was nominated by Colm Markey (FG); Sinn Féin had nominated Tomás Sharkey, who was only supported by his party colleagues. The Green Party’s Marianne Butler was elected to the position of vice-chairman.

The D’Hondt system will grant councillors, who for almost 40 years remained outside the old pact system in operation between FF, FG and Labour, a greater level of engagement in the city council.

Mary Shields secured the position of Lord Mayor with 26 votes. She was nominated by Seán Martin (FF), brother of party leader Micheál Martin.

First elected in 1991, he was elected to lead the 55-seat chamber on the second vote in a three-way contest with Fine Gael’s Deirdre Forde and Sinn Féin’s Bandon-Kinsale poll-topper Rachel McCarthy.

Mr Coleman’s election is the result of an agreement between Fianna Fáil, a majority of the 10 Independents and two Labour councillors.

The chamber is made up of 17 Fianna Fáil members, 16 Fine Gael, 10 Sinn Féin, 10 Independents and two Labour. Mr Coleman said Fianna Fáil had spoken to all parties and Independents in an effort to agree a pact. Timmy Collins (Independent) took over the role of deputy mayor.

Mr Lyons, who was formerly in the Progressive Democrats and was mayor of Galway between 2001 and 2002, was voted in to office at a Galway city council meeting following conflicts earlier this week over a mayoral pact.

Fianna Fáil whip Michael Crowe had accused Mr Lyons of reneging on an agreement with his party and Fine Gael which would have ensured control of the council and rotation of the mayoral office by the three groupings. Instead, Labour is part of the pact.

Ms Hoade was elected mayor of Co Galway at a meeting of Galway County Council. The Fianna Fáil councillor from Headford represents the Tuam electoral area on the new council.

At the inaugural meeting, leader of the Fianna Fáil group Michael Collins described the partnership with Fine Gael as a “new departure” for politics in Limerick.

The election of Mr Crowe followed 10 meetings that will see two Fianna Fáil mayors and two Independent mayors take office during the life of the five year council. This follows FF securing 12 of the 28 seats, with FG taking eight, the Independents seven and Sinn Féin one.

County councillors came together for their first all-county meeting in Holycross following the merger of the north and south Tipperary councils before the elections.

Fianna Fáil and Fine Gael have 10 seats each on the 40-member council so needed one more vote to take control. They received it yesterday through Independent Eddie O’Meara. Mr Fitzgerald was elected by 24 votes to 16.