Sinn Féin says Varadkar’s excuse for leak is ‘in tatters’ 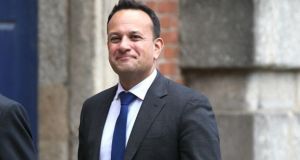 Sinn Féin has accused Tánaiste Leo Varadkar of changing his story about the leak of the agreement with GPs, claiming that his explanation for his actions was now “in tatters” during testy exchanges in the Dáil yesterday.

Meanwhile, Rise TD Paul Murphy is to press the standards watchdog on a complaint he made about Mr Varadkar before Christmas.

Sinn Féin finance spokesman Pearse Doherty questioned Mr Varadkar on disclosures this week under the Freedom of Information (FOI) Act which showed that senior health officials were strongly opposed to the publication of the document which Mr Varadkar, who was then taoiseach, sent to his friend Dr Maitiú Ó Tuathail in April 2019.

Dr Ó Tuathail was then head of a GPs’ group set up to rival the Irish Medical Organisation (IMO), which had negotiated the new agreement with the Government.

Mr Doherty questioned the Tánaiste about where he had got the document that he sent to Mr Ó Tuathail. Mr Varadkar had previously said in the Dáil that his adviser had requested a copy of the document from the Department of Health. However, FOI requests from Sinn Féin revealed no record of a request from the then-taoiseach’s office for a copy.

Mr Varadkar told the Dáil today that his adviser already had a copy, which she provided to him.

Mr Doherty said that the FOI documents showed that the Taoiseach’s defence of his actions in November was now “in tatters”.

Mr Varadkar repeated his apology for the leak, but said that Mr Doherty was trying to “reheat an old political controversy by going over old ground”. He said “the House heard about this and voted on this last November”.

Mr Varadkar insisted that all the important details of the agreement were already known when he sent the document to Dr Ó Tuathail.

“There was nothing in those emails to suggest that the document was commercially sensitive or that it was secret. As I said in November, had the changes been substantive, they would have had to go back to Cabinet. It did not go back to Cabinet. All the salient details were out there in the public domain,” Mr Varadkar told the Dáil.

He said his motivation was to convince the National Association of General Practitioners – Dr Ó Tuathail’s organisation – to back the deal, which it did.

“The office of an Taoiseach was used to pull a stroke for a friend,” Mr Doherty said.

Aontú leader Peadar Tóibín said that the leak had been an “act of corruption and abuse of his office”.

He said that the details of the emails published in recent days “rebut the defence mustered by Varadkar, and show his answers in the Dáil were dishonest and disingenuous”.

He said the actions of the Fine Gael leader were “especially hypocritical given the Tánaiste’s call for an investigation into the leaking of the mother and baby homes report to the press.

“Micheál Martin must act to send a clear message this conduct and deception is unbecoming and unacceptable in his government,” he said.

Rise TD Paul Murphy said that the new revelations confirmed that Mr Varadkar had broken the ministerial code of conduct “because it undermines his excuse that the details of the leaked agreement were already public”.

Mr Murphy made a complaint to the state’s ethics watchdog, the Standards in Public Office Commission (Sipo), but has received no information on any investigation.

“I have contacted Sipo seeking an update of their investigation of my complaint,” he said last night.