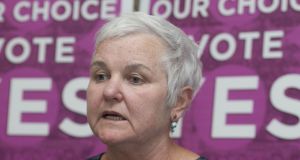 People Before Profit TD Bríd Smith says she will make contact with those in the Green Party who are dissatisfied. Photograph: Dave Meehan

Fianna Fáil and Fine Gael are using the Green Party as a “fig leaf” in order to exclude Sinn Féin from government, Sinn Féin TD Pearse Doherty has said.

Opposition party representatives called on “left-wing activists” in the Greens to leave the party.

“People voted for change in the general election, they voted for a fresh start and for a new beginning. They voted for a move away from the two parties that have shared power in this State for nearly 100 years,” Mr Doherty said.

“Faced with the prospect of a government of change, the two old parties have come together to circle the wagons to exclude Sinn Féin, and they are using the Green Party as a fig leaf to do this.

“The reality is that the desire for change is even stronger now than it was in February. People know what it’s like to have Fianna Fáil and Fine Gael in power together,” he said, referring to the confidence and supply deal in the outgoing administration.

Mr Doherty said that Sinn Féin will be “determined” in leading the opposition and would “stand up for ordinary workers and families”.

Rise and Socialist TD Paul Murphy urged activists in the Greens to leave and find a new political home.

“Over the last week, Green Party members who opposed the programme for government waged an impressive fight against entering a right-wing coalition with Fianna Fáil and Fine Gael,” he said.

“There will be big pressure on the anti-coalition Green TDs now to vote for a government they themselves have warned will be ‘one of the most fiscally conservative in a generation’ and ‘will make homelessness worse’.

“They should not give in to that pressure. Instead they should follow their principles, not their party, and vote no to this right-wing government tomorrow.

“Left-wing activists in the Greens should leave and join with others on the left in building a broad eco-socialist left party.”

People Before Profit TD Bríd Smith said she would be making contact with those in the Green Party who are dissatisfied.

“There is 26 per cent of the Green Party who are not happy. I know that 26 per cent are radically motivated by climate justice. They are going to be saying what the hell am I in this party for. I have been talking to them and I am asking them to join us. Don’t keep putting your hopes in a failed left. Fine Gael and Fianna Fáil don’t want to address emissions.”

“Irish people can expect that there is going to be huge unemployment and an attack on the social welfare system and worker’s wages. How do they pay for a recession? They pick the low-hanging fruit. We have to fight against that.”