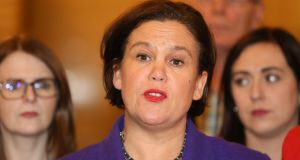 Sinn Féin accepted it could not persuade the DUP to sign up to same-sex marriage in the North, and last week’s draft agreement between the two parties acknowledged that the largest unionist party could block a Bill at Stormont if it could muster sufficient support.

However, Sinn Féin now believes that the draft agreement with the DUP is dead and has asked the British Labour Party to consider tabling legislation for the marriage measure at Westminster.

Sinn Féin strongly supports the legalisation of same-sex marriage in the North, while the DUP has blocked the measure. Sinn Féin has been in consultation with LGBT advocacy groups in the North.

The party has confirmed that the paragraphs concerning same-sex marriage in the leaked drafts of the agreement signal that the party accepted that the DUP could seek to block legislation at Stormont.

Effectively it meant that under the agreement with Sinn Féin, the DUP – as long as it could secure the support of two other MLAs – could continue to block same sex-marriage in the North.

However, Sinn Féin will now press for legislation at Westminster to allow same-sex marriage in the North, and the issue was discussed on Wednesday when the party leaders Mary Lou McDonald and Michelle O’Neill met with the British Labour leader Jeremy Corbyn in London.

The Sinn Féin leadership also met the British prime minister Theresa May in Downing Street on Wednesday, after which Ms McDonald warned that the British government “does not have a plan” on the North.

The Sinn Féin leader also warned that a period of “political vacuum” would be “extremely dangerous”.

“We can only surmise from the meeting with the British prime minister that the government here does not have a plan, does not have a viable plan for carving a pathway to the restoration of the institutions,” Ms McDonald said afterwards .

Ms McDonald said she feared Northern Ireland was entering a period of “drift” and “entrenchment”.

‘Dig their heels in’

“I fear that those elements who were likely never really up for a deal will dig their heels in further and are further emboldened,” she said.

Ms McDonald again called for the convening of a meeting of the British-Irish Intergovernmental Conference which gives Dublin a consultative role in the affairs of Northern Ireland.

Notwithstanding the leaked draft agreement text, Ms Foster – who also had a meeting with Ms May on Wednesday – said the DUP was “not contemplating bringing in an Irish language Act and I could not be clearer in relation to that”.

“If you look at the so-called draft agreement, that is only one of a number of documents that were circulated and put out and about,” she added. “I think the important thing is that we now reflect on where we got to in relation to all of those issues.”

Ms Foster, who was accompanied by DUP deputy leader Nigel Dodds, urged Ms May to introduce a budget for Northern Ireland. “I think she heard that very loud and clear. I’m hopeful that it will happen in weeks, and that it will set out the trajectory for public services in Northern Ireland,” she said.

2 Miriam Lord: Back to school for foot-in-mouth specialist Josepha

Miriam Lord: Back to school for foot-in-mouth specialist Josepha