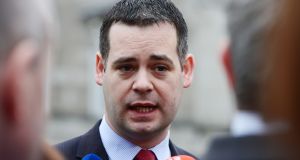 Pearse Doherty: he said the budget failed to ease the pressure on workers and families

Instead, he said, the budget favoured bankers, insurance companies and other vested interests that the Government and Fianna Fáil “will never stand up to”.

Speaking in the Dáil, Mr Doherty said that on top of “out of control rents, rip-off insurance premiums, unaffordable childcare costs”, people were now faced with increased carbon taxes. What had started with a small increase would continue to rise, “squeezing households with no alternatives”.

This Government “introduced child homelessness as a permanent feature in our society, and have laid out the red carpet for the cuckoo funds and for the speculators who have bought out our cities, pushed out prices and locked people out of the property market and into an unaffordable rental system”.

The Government attempted to deal with serious tax avoidance among property investors by introducing a 20 per cent capital gains tax for previously exempt real estate investment trusts, but Mr Doherty said it did not level the playing field when any other company had to pay 33 per cent in tax.

Labour finance spokeswoman Joan Burton claimed the Government had shown an “unbelievable error of judgment” by excluding those “most vulnerable” to a hard Brexit from budget benefits.

She said a messy departure from the EU by Britain would result in food price increases and “will hit people on the lowest incomes, those on very low pay”, those relying on social welfare and the retired.

Labour health spokesman Alan Kelly said the budget “is a sham budget for health that will do absolutely nothing to deal with the year-round winter conditions in our hospitals” and the 100 unfilled nursing posts in University Hospital Limerick, the hospital with the highest trolley count.

“An extra €25 million for National Treatment Purchase Fund means that €100 million will be spend buying private healthcare next year while no real measures are brought in to tackle the crippling waiting lists.”

Solidarity TD Mick Bailey said there were no conditions being put on the bailout that many large firms would get for Brexit, but “the only mention of workers in the Minister’s speech is provision for social protection payments for workers being laid off”.

He warned carbon tax would only have a minimal impact on climate change but would increase fuel poverty because the €2 a week increase in the fuel allowance was equivalent to just half a bale of briquettes.

People Before Profit TD Richard Boyd Barrett said 720,000 people lived in poverty, including 230,000 children, and it was a “big mistake” not to increase State pension, unemployment and other social welfare benefits.

Rise TD Paul Murphy claimed the Construction Industry Federation had written the budget for the Help-to-Buy scheme which assisted first-time buyers. The former Solidarity TD dubbed it the “help-to-profit” scheme for developers, and claimed it kept prices up on new homes, would cost €100 million a year and passed through the hands of new homeowners to the back pockets of big builders.

Independents4Change TD Thomas Pringle criticised claims in the budget speech that Ireland had a well run economy. He asked how it could be deemed well run when there were more than 10,000 people homeless.

Rural Independent Mattie McGrath said the Government had promised to rural-proof all policy initiatives, but had failed to assess a single measure it had introduced since it entered office in 2016.

1 Tributes paid to Ireland’s deputy ambassador to China who died on Sunday
2 Coronavirus: No new Covid-19 deaths reported in State for first time since March
3 Coronavirus: What will reopen in Ireland’s phases to ease restrictions and what are the dates?
4 WHO warns of potential for ‘immediate second peak’ in Covid-19
5 Man admits rape of boy after drugging him with pain relief substance, court told
Real news has value SUBSCRIBE