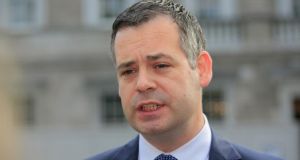 Sinn Féin’s finance spokesman Pearse Doherty: “The DUP should not have a veto on Brexit.”

Sinn Féin’s finance spokesman Pearse Doherty has warned the Minister for Finance “not to use Brexit as an excuse” in the forthcoming Budget.

Minister for Finance Paschal Donohoe has said social welfare increases in the October 8th package will be “focused” and “targeted at those who are vulnerable”.

The level of social welfare increases in next month’s budget is likely to be lower than previous years as the Government scales back its spending plans to deal with a potential no-deal Brexit.

Mr Doherty told RTÉ’s Morning Ireland that Brexit was “very convenient to allow the Taoiseach wriggle off the hook” about previous promises such as tax cuts.

The Opposition needs to be clear that it will not allow the Government to use Brexit “as a way of not doing things”.

He also called for funds to be diverted from the Government’s rainy day fund into a Brexit stabilisation fund.

There are strict and specific guidelines as to what the Rainy Day Fund can be used for, said Mr Doherty and it cannot be used “for dealing with Brexit.”

A Brexit stabilisation fund could be used for job stimulation, direct support for sectors such as agriculture and regional assistance, added Mr Doherty.

“In a shock like that (Brexit) you have to stimulate the economy and stabilise some sectors. That is in line with what the Fiscal Advisory Council advised.”

The Donegal TD pointed out that some geographic areas will need help, especially Donegal which already suffers 12 per cent unemployment. “Donegal can’t take a blow like Brexit.”

“The DUP should not have a veto on Brexit.”

If that were to change then the Assembly “could be up and running very quickly,” he said.