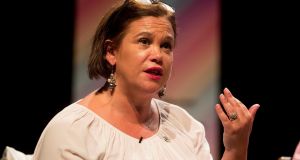 Mary Lou McDonald: she said that if there was to be a hard Brexit next year the British government would have to hold a Border poll. Photograph: PA Wire

The leaders of Fianna Fáil and Labour and the Minister for Justice, Charlie Flanagan, have questioned the abrupt U-turn on a Border poll made by the Sinn Féin leader Mary Lou McDonald earlier this week.

On Monday, in an interview with the Press Association, Ms McDonald said the Border poll question should be put to one side until the “dangers” posed by Brexit are mitigated.

Ms McDonald said she disagreed with those who argued that a hard or chaotic Brexit should be the trigger for a referendum on unification.

However, speaking to journalists at Leinster House on Tuesday, Ms McDonald said that if there was to be a hard Brexit next year, the British government would have to hold a Border poll.

“Should the British government insist on crashing the North out of the European Union, well then be very clear that they would have no option but to put the constitutional question. I mean it would be an absolute imperative in those circumstances,” Ms McDonald said.

Sinn Féin denied there was a contradiction between the two statements on Tuesday. However, the party declined to answer further questions about the matter on Wednesday, including how the decision on party policy on the Border poll was reached.

Sinn Féin’s political opponents in Leinster House seized on the U-turn, wondering what prompted Ms McDonald to withdraw her view that a Border poll would be a wrong response to a hard Brexit, and to say instead that it should require an immediate such poll.

“It was a very significant change from Monday to Tuesday,” Fianna Fáil leader Micheál Martin said. “I thought on Monday she was trying to chart a new course. Somebody said ‘hold on, that’s not the position’. It raises serious questions about who’s in charge in Sinn Féin.”

He said Sinn Féin had “entwined the constitutional issue and the Brexit issue – that’s very unhelpful.”.

“Sinn Féin should concentrate their efforts on restoring the powersharing institutions,” Mr Flanagan said. “Flip-flopping on very sensitive issue Border polls only adds further to the uncertainty of Brexit for Northern Ireland.

“A political vacuum is dangerous. Vacuums are filled by those who have no regard for the tools of democracy. We’ve seen that manifest in recent violence in Belfast and Derry.”

Labour leader Brendan Howlin said it showed the “puppet masters” in Sinn Féin were still in charge, and that Ms McDonald “still has to toe the line”.

He said the notion of a Border poll first, ahead of a process of dialogue and engagement, “is just wrong”.

“Anyone who has looked at the evolution of Sinn Féin – none of us doubt that it is behind-the-scenes forces that still hold sway.”

Ms McDonald, he said, was trying to take a step forward “but has to look over her shoulder”.

Government backbencher Noel Rock said: “Traditionally in politics a party leader is responsible for setting the course of a party. However, in this case we can only reach two conclusions: Deputy McDonald doesn’t know her own mind on this matter or others have told her to change it quickly.”

SDLP leader Colum Eastwood MLA said Ms McDonald’s “hand-brake turn on the premature calling of a Border poll on the near side of Brexit is yet another indication of the party’s infantile handling of the issue”.

Mr Eastwood said he was disappointed that Ms McDonald abandoned her sensible position within 24 hours. “This approach by Sinn Féin has done serious damage to the unity project over the years, and they must now recognise more is at stake than merely preaching to the converted.”