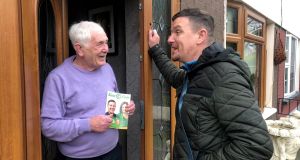 The North Clondalkin native was co-opted to South Dublin County Council to succeed Mr Ó Broin when he was elected to the Dáil in the 2016 general election.

Cllr Ward held onto the seat in this year’s local elections and now joins Mr Ó Broin, his director of elections, to become the second Sinn Féin TD in Dublin Mid-West.

He has also become the party’s talisman for what it hopes will be a resurgence in Dublin particularly, but nationally as well after poor presidential, European and local elections.

A behavioural therapist, he assists people who have suffered trauma in their lives.

He also mentors two GAA teams at Round Tower club.

A self-described “huge Dubs fan” he has a tattoo to prove it and says that one of his proudest moments when he was mayor of South Dublin council was to present a community endeavour award to Dublin manager Jim Gavin who announced on Saturday that he was stepping down.

Outgoing and very popular in the North Clondalkin area, he is well known for campaigning for better services for a poorly served pre-dominantly working class community.

He sees his win as a rejection of “austerity politics, of hospital waiting lists, housing waiting lists and people being put to the pin of their collar with high rents and stuck in gridlock on poor transport”.