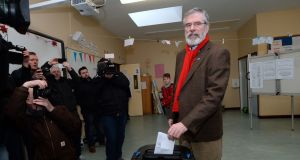 Gerry Adams may have had his battle bus touring the countryside on the campaign trail, but when it comes to actually getting the vote out, you can’t beat a nippy Mercedes-Benz Vito to zip around the housing estates of Cork South-Central to ferry voters to the polling stations.

Decorated with posters of the party’s young contender, Cllr Donnchadh Ó Laoghaire, the Vito was just one of six vehicles operating in the constituency as Sinn Féin mounted a major operation to get their supporters to the polls.

Driver Roger Lee and navigator Don Bullman were on the road from 7am, collecting voters in Togher, Crosshaven and Carrigaline before they arrived in a drizzly Passage West at lunchtime to team up with party organiser Tommy Hanlon.

Canvassing teams had given Hanlon a list of voters who needed a lift. The first port of call was the Rockenham estate where his mother Sheila availed of the transport to cast her No 1 for Ó Laoghaire.

Then it was over to Ardmore estate to pick up Carmel Murphy who explained Ó Laoghaire was sorting out a problematic boiler for her. “The lift is great because no one else came around except Sinn Féin – Fianna Fáil never did that for me. I hope Donnchadh gets in.”

After the two women voted, it was back to Rockenham to pick up Regina O’Sullivan and then on to nearby Pembroke to pick up Audrey Fahy.

To the sound of Luke Kelly singing Song for Ireland, Fahy said she believed only Sinn Féin could offer improvements to the health service.

“I’ve been waiting 18 months to see a consultant about my knee and I’ve been told it could be another two years – that’s just not on.”

Back to the city

But how could they be sure everyone they brought would vote for their man?

“We can’t,” smiled Hanlon, “but even if they don’t, we might get a No 2 and every transfer will count.”