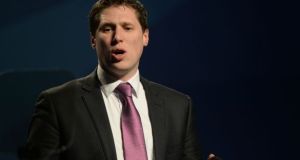 Sinn Féin MEP Matt Carthy said he did not believe he could mount a credible campaign in the short period of time available.

Sinn Féin MEP Matt Carthy has confirmed he will not seek the position of deputy leader of the party.

Mr Carthy confirmed he has received the necessary number of nominations to allow his name to be listed as a candidate. However, he did not believe he could mount a credible campaign in the short period of time.

Mr Carthy said: “I am aware that there is a large desire within many structures of the party for a contested election for the position of leas-uachtaráin. I strongly share the view that a contest would be healthy and an opportunity for a positive debate within Sinn Féin as to the future of our party and the role of the vice president.

“However, it shouldn’t just be a contest for the sake of it.”

Michelle O’Neill, the party’s leader in the North, is the only candidate to declare for the position. Pearse Doherty, the party’s finance spokesman, will not participate in the contest.

The position will be confirmed at a special ardfheis on February 10th, which will also ratify Mary Lou McDonald as Sinn Féin leader.